SONIA SOTOMAYOR: The final verdict is a resounding "NO" 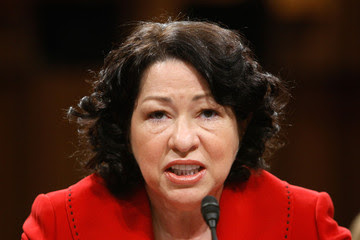 As I recently watched the confirmation hearings Sonia Sotomayor I couldn't help but wonder how many were fooled by her performance. On the surface, it really was a masterful piece of theatre, but I guess when you are almost within grasp of one of the top jobs in America - a job that guarantees you a lifetime of influence - the stakes are high enough to be extremely mindful of how you are perceived.

Having said all that, and notwithstanding that meddler in chief BO seems determined to set Sotomayor up for life, it seems that not all Americans are buying into the faux dedication to the LAW of the land on display, versus her 'wise Latina woman' interpretations in her career to date. .

SONIA SOTOMAYOR: THE FINAL VERDICT IS A RESOUNDING “NO”

TO: JCN MEMBERS AND INTERESTED PARTIES
FROM: WENDY E. LONG, COUNSEL
GARY A. MARX, EXECUTIVE DIRECTOR
DATE: JULY 27, 2009
RE: SONIA SOTOMAYOR: THE FINAL VERDICT IS A RESOUNDING “NO”

Judge Sotomayor’s written and oral responses to Senators’ questions were evasive, contradictory, and frequently characterized by semantic acrobatics or feigned ignorance, exacerbating our concerns instead of alleviating them.

Judge Sotomayor’s testimony reinforced our conclusion that her three decades of political activism, speeches, law review articles, legal advocacy, and judicial decisions demonstrate that, if she is confirmed, Justice Sotomayor will be a supreme liberal judicial activist, outdoing and outflanking the Justice she is replacing, David Souter, in this regard. Her belief that judges should rely on their own views, instead of the law as written, in deciding cases would take our nation a critical step further away from the Rule of Law and toward the Rule of Nine Lawyers.

The pre-hearing polls conducted by CNN and Rasmussen Reports revealed that more Americans oppose Judge Sotomayor’s confirmation to the Supreme Court than any other successful nominee in the last two decades. According to the post-hearing polls conducted by USA Today/Gallup and ABC/Washington Post, opposition to Sotomayor INCREASED (by 3 percentage points and 5 percentage points respectively).

Simply put, the more Americans learn about Judge Sotomayor’s record, the more they oppose her nomination. A growing number of Americans are concluding that she is a very liberal judicial activist in the mold that President Obama promised when he told Planned Parenthood he would appoint judges who decide the “hard” cases based on personal politics and feelings. It should be noted that important parts of her record have never been disclosed (such as what input she had into the legal strategies advancing racial quotas and late-term-abortions-for-minors-at-taxpayer-expense-without-parental-notification that the Puerto Rican Legal Defense and Education Fund advanced during her years of leadership).[emphasis mine]

Gee, "It should be noted that important parts of her record have never been disclosed". Where have we heard that before?

There is more, much more, clearly explained and justified, and you MUST go read that here at the Judicial Confirmation Network.

As usual, I did check out who this JCN is, as it always a good thing to check who is saying what:

The Judicial Confirmation Network is an organization of citizens joined together to support the confirmation of highly qualified individuals to the Supreme Court of the United States. In addition, JCN works to ensure that the confirmation process for all judicial nominees is fair and that every nominee sent to the full Senate receives an up or down vote.

We believe that the qualifications desirable in a nominee include:

We believe that the proper role of a judge or justice is to interpret the law and the Constitution – not make up the law and deprive the people of the right to govern ourselves.

We believe that a judge or a justice should not use the power of the court to impose his or her personal or political agenda on the people. (here)

Consider the whole thing emphasised! As your President is determined to set his mark on America, I sincerely urge all of you to pay close attention. As each day goes by, yet another distraction surfaces, while BO continues on reshaping the USA.

The Supreme Court does important work as guardians of the law of the land. WHO gets to sit on that court, and interpret the laws and the Constitution is far too important for Americans to just ignore.

He may not think so, but POTUS and all the elected officials are YOUR employees. They work for YOU. Keep calling, and make sure your views are heard.