A Father's Cry To The World 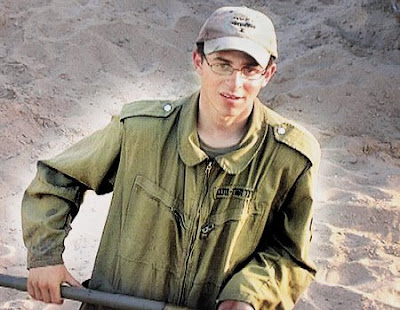 On July 6, 2009 Noam Shalit addressed the members of the United Nation fact-finding commission on Gaza headed by Judge Richard Goldstone. This commission was formed to lay all blame on Israel, not even considering that Hamas should bear blame too.

Noam Shalit is the father of Israeli POW Sgt. Gilad Shalit who has been illegally held in Gaz for 3 years. His words are painful and telling:

From UN Watch
My name is Noam Schalit and I am the father of the kidnapped Israeli soldier Gilad Schalit.

Honorable members of the Mission - I thank you for giving me the opportunity to address you today. I thank you, also, for allowing me to make my testimony public. I know that this Mission is determined to give the victims of the recent conflict in Gaza an opportunity to make their voice heard. So - with your kind permission - I would like to use this distinguished forum - the United Nations - first to address you and then to address the people of Gaza and, in particular, the people holding my son Gilad.

Honorable Members of the Mission, a few weeks ago you were in Gaza. You met the Hamas hierarchy. According to the Ma’an news agency - Mr. Ismail Haniyya welcomed your mission deploring what he viewed as Israel’s grave violations of international law. The same news agency reported that the Mission thanked Mr. Haniyya for his cooperation in facilitating its work. Sirs and Madam, if this cooperation is indeed genuine then the same HAMAS hierarchy should honor your eventual findings - whatever they may be.

And I have no doubt that after you read my written submissions, you will determine that my son’s violent abduction and his continuing detention subject to extortion is, equally, a violation of international law. After you hear the cassette recording of my son’s voice - released on the first anniversary of his capture - you will be shocked by the callous cynicism of his captors and the grief that his words have caused me and my family. These are words that he was forced to read. You will also find, without a doubt, that the refusal to allow him access to the Red Cross, if not a war crime is, at least, a gross act of inhumanity and an aggravating circumstance...

Go and read ALL of this father's plea at Monkey in the Middle here.

And... Israeli Soldier's Mother has a piece up:

I'm not a diplomat and while I can sometimes be diplomatic, other times, I clearly lack the needed finesse to deal with manipulations and negotiations. It's a good thing I'm not part of the Israeli government; I have no patience for hypocrisy.

Let us always remember Gilad and his family.
Posted by The Brat at 3:33 AM

Email ThisBlogThis!Share to TwitterShare to FacebookShare to Pinterest
Labels: Gilad Shalit, Monkey in the Middle, Noam Shalit to the UN