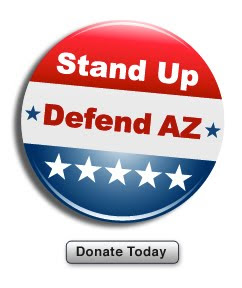 By now, any American even half awake has heard that Barack Obama is taking Arizona to court. In what has to be the depth of stoopid, it seems the BHO admin is fighting Arizona's law against ILlegal immigration: this law that almost exactly mirrors the federal law that BHO and his cohorts are determined to ignore. SB 1070 will address the ever expanding problem ILlegal immigrants who are using the Arizona border as a direct route into the US, as they bring their illegal activities (you know, like murdering Americans, etc etc ad nauseum) into the United States of America. For more details on BHO's latest assinine (and illegal?) refusal to ignore or enforce the federal laws of America, go here.

Arizona needs your help to defend against Obama lawsuit

Today, we received official notice of the federal government’s lawsuit against the state of Arizona.

I am sure you will agree with me that the Administration’s lawsuit is an outrageous use of taxpayer money and a sure sign that the President is more interested in politics than securing our southern border.

This lawsuit follows the President’s immigration speech in which he called for comprehensive immigration reform that – not surprisingly – includes a path to citizenship for those who entered our country illegally.

Let me be clear, I will defend the rule of law all the way to the Supreme Court of this land if necessary. I will continue to demand that the Federal government live up to its responsibility to control our Southern border and to protect our homeland. And, I will oppose the President’s amnesty plan.

But I need your immediate help today.

In order to respond to President Obama’s lawsuit I have set up a legal defense fund to pay the legal fees that Arizona has been forced to incur as a result of all of these lawsuits.

I urge all Americans who want a secure border to contribute to this fund immediately.

This is not just an Arizona issue, this is an American issue. Are we or are we not going to enforce the rule of law in America? The burden alone should not be shouldered by Arizonans. Arizona needs you to answer the call today, right now.

Make no mistake; Arizona’s immigration law affects the safety and well-being of every U.S. citizen. The federal government has failed to enforce the rule of law.

As long as the Federal Government refuses to do its job, I will ensure that Arizona continues to live by a rule of law.

Your immediate donation of $250, $125, $75 or whatever you can afford you can afford will go directly into fighting President Obama’s lawsuit. I do ask that you make this very important commitment today so we can immediately begin to defend against the President’s actions.

Arizona is the front line of our nation’s illegal immigration crisis. The federal government is broken and our border is not secure. That is why Arizona had to act.

I will not stop fighting to protect our country. I will defend us in federal court and we will continue to do the job President Obama refuses to do. 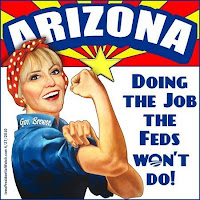