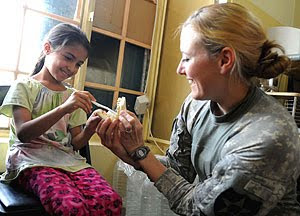 
DIYALA — U.S. Army medics and doctors recently volunteered to visit the Bakhtiyari Medical Clinic in the neighborhood of Khaniqan here to provide medical care to residents.

Throughout the day, approximately 300 people entered the clinic to seek treatment and medicine for ailments ranging from minor aches and pains to more serious injuries or diseases. While these men, women, and children displayed different symptoms, they all share a common background.

“Bakhtiyari is actually made up of a lot of residents who were prior displaced persons in Iran,” said Capt. Nick Shallcross, of Longmont, Colo., the commander of Alpha Troop, 1/14th Cav. “They are all Iraqi, many of whom are Shia, that were kicked out of Iraq by the Saddam regime. They lived in refugee camps in Iran, and then came back to Khaniqan after the fall of Saddam.”

This quarter of Khaniqan was a “tent city” a couple years ago before the refugees began building permanent homes for themselves. This neighborhood also has a Red Crescent center, an Iraqi Police Station and a small clinic, Shallcross said.

“We’ve been planning a MCMO in Bakhtiyari for awhile,” Shallcross said. “We have done three MCMOs in this northern part of our AO [Area of Operation] since January. We identified Bakhtiyari for this because, since they were displaced persons, they don’t get a lot of support and we wanted to help them out.”...

Email ThisBlogThis!Share to TwitterShare to FacebookShare to Pinterest
Labels: B*N*S*N3 US medics in Bakhtiyari