"A Cry to the World" for Gilad Shalit [Update]

For four years, Gilad Shalit has been held by Hamas. Despite attempts by the Israeli government to negotitate for his return to his family, Shalit is still being held in an unknown prison. As the dollars from the UN and the US continue to pour into Gaza unimpeded, Hamas ignores all efforts to release Shalit back to Israel. Just last week, his parents began a march to enforce the call to have Gilad returned to them:

The parents of Sgt. Gilad Shalit, the Israeli soldier seized during a cross-border raid by militants from the Gaza Strip, started on a long march from northern Israel on Sunday to mark four years since his capture.

Gilad Shalit's parents on a 12-day march to Jerusalem in an attempt to secure the release of their son Photo: REUTERS

Flanked by hundreds of supporters, they set out on a 12-day march to Jerusalem to press their government to make a deal with Hamas militants to win his freedom.

His parents say they will camp outside Prime Minister Benjamin Netanyahu's official residence until the government wins the release of their 23-year-old son, who has not been seen in person since he was seized. (More here)

Today, the Israeli Symphony Orchestra is adding their 'voices' to the effort:

Gilad Shalit Concert - "A Cry to the World" 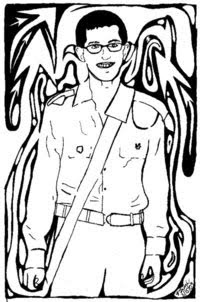 In view of the stagnation in the 4-year negotiations for the release of Gilad Schalit, who is held in a Hamas Prison in Gaza, the Israel Philharmonic Orchestra has joined forces with the Public Headquarters for the Saviour of Gilad in a unique attempt to vocalize the terrible pain of Gilad Shalit's imprisonment and seclusion.

The Israel Philharmonic Orchestra will perform a concert conducted by Music Director Zubin Mehta in the afternoon of the 5th of July, 2010 as a tribute to Gilad Shalit and a testament to the pain felt by his family, friends, and all of Israel. The concert will feature selections from the classical repertoire as well as contemporary Israeli songs performed by the IPO, the Jerusalem Academy Choir, and soloists Shlomo Artzi and Daniela Skorka.

The open-air concert will take place in Park Eshkol, a public park near the Gaza-Israel border, with the hope that the Orchestra’s sounds will reach Gilad. The event will be secured and supervised by the I.D.F. and the police.

Transportation to the concert is provided and admission is free. Buses to Kibbutz Kfar Aza will be leaving from:
Tel Aviv - Arlozorov Station, 15:00
Jerusalem - Binyanei HaUma, 15:30
Haifa - Hof HaKarmel Train Station, 13:30
Be'er Sheva - Sports center next to the University, 16:00

The goal of the concert is to convey the cry of pain in any way we can: international media; Maestro Mehta and the Orchestra; speeches; and, of course, a large audience who will come from all over the country to express their empathy and support.

Please join us in making this concert a meaningful and moving Cry to the World.

We cannot all be physically in Israel to lend our support, but we can listen online:

Connect with us online to watch and listen as the Israel Philharmonic Orchestra performs a concert, "A Cry to the World", on Monday, July 5th, conducted by Maestro Zubin Mehta, to draw the world's attention to the plight of Sgt. Gilad Shalit. Shalit has been held in captivity, in isolation, for four years by Hamas with no visits permitted from the Red Cross or any other organization. This humanitarian effort is a tribute to Gilad Shalit and a testament to the pain felt by his family, friends, and all of Israel.

More information on that here.

May he come home soon.

A classical concert in support of captured Israeli soldier Gilad Shalit has been held in Sderot on the border with Gaza.

Before the performance, Sgt Shalit's family and supporters visited the site of his capture along the border.

He was seized by Palestinian militants on a raid into Israel in June 2006.

The free concert was attended by thousands of people including a number of Israeli politicians and foreign diplomats.

"It is a gesture for this young man and his family in order to tell the world that four years without a single visit is too long," said the conductor, Zubin Mehta, before the Israel Philharmonic Orchestra played.

"We have an obligation to dream and we want Gilad Shalit, in the first instance, to receive Red Cross visits, and then to be freed as soon as possible."... [emphasis mine]

Email ThisBlogThis!Share to TwitterShare to FacebookShare to Pinterest
Labels: A Cry to the World, Gilad Shalit, Israeli Symphony Orchestra