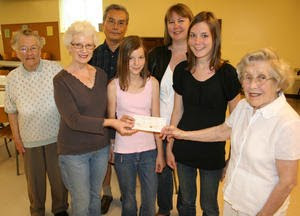 PETAWAWA -A few summers ago Brittany Stewart and her sister, Sarah, were attending a camp for military children when they found themselves in a difficult situation.

The campers had gotten together with their counsellor to talk about what it would be like when their deployed mother or father came home from Afghanistan. The two girls immediately felt out of place. Their father wasn't coming home.

"Brittany loved everything about the camp and loved making new friends," explained the girls' mother, Christa Stewart. "When she got home she got to thinking that if she was feeling this way, there may be other kids who would be feeling the exact same."

Life changed for the Stewart family on April 11, 2007 when Master Cpl. Allan Stewart, of the Royal Canadian Dragoons, was killed after his armoured vehicle struck an improvised explosive device west of Kandahar City. He was on his way to assist another vehicle that had been disabled by a mine. Trooper Patrick James Pentland also died in the blast.

Brittany was only 12 at the time. Her sister, Sarah, was nine. While attending "Hero Camp" at Bloomfield, Ontario near Trenton, Brittany found they could not relate to the other kids after that discussion.

"It was awkward. The kids treated us differently after that," Brittany said, noting it was there that she dreamed up the concept for this special camp. "I really hope this makes a difference."...

Brittany's FaceBook page, Support for Children of the Fallen, says this:

I set this group up to be of help to those children who have lost their parents, aunts, uncles, brothers, sisters in Afghanistan. We need to support each other.

There is a beautiful poem on that page. Check it out. 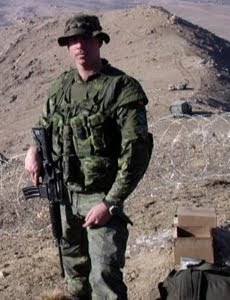 Master Corporal Allan Stewart, who was killed April 11, 2007, is seen in this photo taken from his geocities website while he was on patrol in Afghanistan.

..."He was a straight shooter," said Ken Finney, a teacher at the Art Institute of Toronto who knew MCpl. Stewart by his on-line nickname, Dr. Evil TAG. "He never dealt anybody a bad hand. You had this mental image of this guy with a wide smile."

MCpl. Stewart empathized with the local population, which has endured decades of fighting. (Globe and Mail here)

It is obvious that Brittany and her sister Sarah meant the world to their daddy:

Master Cpl. Allan Stewart, who died in Afghanistan on Wednesday when his vehicle hit a roadside bomb, was born for the military but lived for his two daughters, says his sister.

Master Cpl. Allan Stewart, who died in Afghanistan on Wednesday when his vehicle hit a roadside bomb, was born for the military but lived for his two daughters, says his sister.

"He was about family. Even though he was quiet and kept to himself, we knew he was there for us," said his sister, Tanya Safard, a Saskatoon resident.

"He said this was his last tour. He wanted to be home with his daughters." Stewart, 30, was killed with Trooper Patrick James Pentland, 23, just west of Kandahar City when their convoy of armoured vehicles was attacked. They were members of the Royal Canadian Dragoons, based in Petawawa, Ont.

A career military man, Stewart lived in Trout Brook, N.B., with his wife and two daughters, Brittney, 12, and Sarah, 8.

"He had two younger sisters and two daughters.

He's always been a fi ghter," Safard said. "He spent almost every minute he had with his daughters when he was home." Stewart's other sister, Tammy Shackleton, and his grandmother were in Saskatoon with Safard on Wednesday night mourning Stewart's death.

"(Allan) was strong-willed. He was very quiet, but caring,...(Star Phoenix Saskatoon here)

...As you can tell, Stewie was liked by all, hated by few and remembered by everyone. He is a legend in the RCD. A true friend and quite the comedian I might add. No matter what the outcome, he always had a smile on his face or made you smile. RIP brother and get the carts ready for the next challenge! (here)

This week, children of Canadian fallen heroes are at a summer camp, which was begun by Brittany and Sarah. I am sure that Mcpl Allan Stewart is looking on, so very proud of his beloved daughters. His legacy lives on through his children.

The children also serve.
Posted by The Brat at 4:21 AM