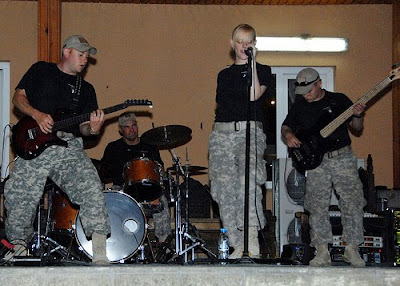 KABUL, Afghanistan (July 11) - In an effort to promote espirit de corps, the members of the 101st Airborne Division Rock Band played a mix of rock, country and alternative music for servicemembers at a live concert held in the Destille Gardens at the International Security Assistance Force Headquarters here July 11.

“We are located at Bagram Air Base, Afghanistan,” said U.S. Army Staff Sgt. Iaian Thompson, lead male vocalist, 101st ABN Division Rock Band. “Our mission is to use our music lifts the spirits of the servicemembers at the areas we visit such as at the forward operating bases, provincial reconstruction teams in Nangarhar, Kandahar , Jalalabad and anybody who wants to hear us.”

The five-member band, also referred to as “Nuts,” plays remixed songs, cover tunes and music from popular bands in the U.S.

“We got our name from the movie the ‘Battle of the Bulge’," said U.S. Army Sgt. 1st Class Jeremy Brown, the manager for the 101st ABN Division Rock Band.

The band was named after the famous single word reply to a German surrender ultimatum “Nuts” made by U.S. Army Brig. Gen. Anthony McAulife commander of the 101st ABN Battalion during the Battle of Bastogne in Belgium.

“It’s a very significant name for the band and memorable,” he said. “We hope to get the servicemembers in a better mood when we play the songs.”

More than 100 members from ISAF attended the concert, and were treated to an eclectic blend of some of the top songs on the rock charts.

“The band members choose the songs based on the crowd participation,” said Brown. “Our audience usually prefers to listen to the remixed music or the original version of the songs.”

“This is my first time attending the 101st Airborne Division Rock Band’s concert and I think they are really good,” he added. “Being deployed you miss quite a lot from home and attending concerts is one of them, but listening to the band play today brought back very fond memories.”

The band is scheduled to play at Kandahar, the Nangarhar Province and Jalalabad to continue their mission of bringing rock music to servicemembers in deployed locations.