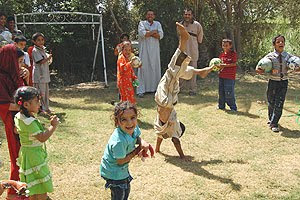 Iraqi children celebrate and play after receiving donated soccer balls from U.S. 1st Advise and Assist Brigade Soldiers outside Baghdad, Sept. 13, 2010. The soccer balls were donated by the Cohansey Soccer Club, based in Upper Deerfield Township, N.J., and delivered by the club president’s son and his unit serving here. U.S.Army photo.

BAGHDAD — When Joe D’Alessandro created the “Winning Hearts and Minds Project” in 2008, the president of the Cohansey Soccer Club, based in Upper Deerfield Township, N.J., had no idea his son would eventually help him spread the spirit of American goodwill overseas.

Since the WHAM Project’s creation, about 5,000 pounds of donated soccer equipment has been shipped to Iraq and Afghanistan to be distributed by U.S. Army Civil Affairs officers. This month D’Alessandro’s son, Pfc. Dominick Skompski, and his fellow Soldiers with Company D, 3rd Battalion, 69th Armor Regiment, 1st Advise and Assist Brigade, 3rd Infantry Division, distributed more than 30 donated soccer balls to children living on farms on the outskirts of the Iraqi capital.

Skompski, who’s played soccer since he was a child, said it felt good to hand out soccer balls to the children.

“[The children] don’t really have a lot out here,” Skompski said. “You might as well give them [at least] a soccer ball. It’s not much, but it’s something for them.”

After receiving their soccer balls, the Iraqi children practiced their dribbling, kicking and heading skills. One boy celebrated receiving the gift by doing a 5-minute-long handstand to the applause and cheers of all assembled.

Skompski said his father’s mission with the WHAM Project—to build trust and mutual respect with the Iraqi children—has been accomplished.

“He [has always been] one to help others when they’re going through a rough time,” Skompski said of his father. “I’m glad he’s helping me.”

Look at those smiles! To get a better sense of this picture, go here.
Posted by The Brat at 3:33 AM