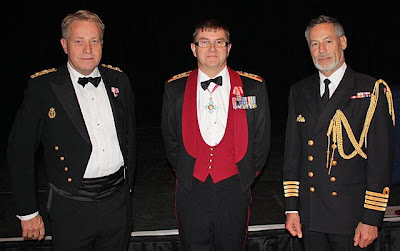 Whilst the Danish personnel was to learn the English system, Hodgetts also took the time to get to know the Danish conditions including taking courses in the Danish language. He was therefore also very prepared when he together with the Danes was deployed as a Medical Director to Camp Bastion from July to October 2009.

The ceremony of the medal was conducted by the Danish Defence Attaché, Captain Niels Erik Sørensen in relation to the field hospital being represented by the British Conference for Emergency medicine which took place in Birmingham from 13th to 15th September.

And more from Defence News, Danish Embassy in London:

Prof Hodgetts was a central figure in the selection and training of personnel for the field hospital in Camp Bastion in Afghanistan in 2009. As some might recall, that was when the UK for the first time in modern times entrusted an allied nation to be in charge of a British field medical unit. A fantastic sign of just how close Denmark and the UK are working together defence-wise these days: to trust others with the care of your wounded. (here)

H/T One of my favourite Danes - Buzzy! He has this to add:

...we're right fond of British Col. Hodgetts.. He personally picked, trained, & oversaw the joint hospital @ Camp Bastion @ KAF. From the original design of the structure [entire structure is a bunker] itself to how wounded soldiers & local Afghans were treated, the Colonel had a hand in it. Can only say, if any of my children were sick, that would be the hospital I'd want them cared for in.

Here's Col. Tim....barking orders during a major incident. Really nice guy though when the crisis is over but during the event...the correct answer is always yes sir, right away sir. He's one of those guys we'd follow into hell with huge smiles on our faces. He's responsible for saving alot [I mean alot] of Danish, US, Canadian, Afghan et. al. lives. Learned alot from him.

With Buzzy's help, I also found a video of Col. Hodgetts:


Do NOT look for stories like this on msm, but we owe a HUGE debt of gratitude to Col. Hodgetts, and coalition partners like Denmark.
Posted by The Brat at 2:45 AM