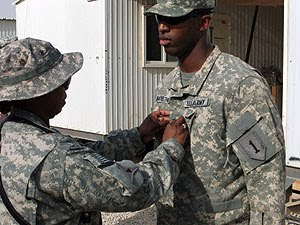 
ALLIL – When Army Capt. Kenieth Mayweather achieved his latest rank here Thursday, his mother, Army Sgt. Maj. Rue Mayweather, was there to share the special moment, performing the ceremonial “pinning” and rendering the first salute to her son as a captain.

“I’ve been to every one of his promotions,” said Rue. “I wouldn’t have missed this for the world.”

Rue has always been proud of her son.

“Kenieth always expressed a desire to excel,” she said. “I am happy for him today like I was when he first enlisted in the Army, and also commissioned as an officer.”

This is the first time Kenieth and Rue have been deployed together, but Kenieth’s promotion is not the first event in Iraq they have shared together.

Rue traveled from Baghdad to surprise her son with a visit for Mother’s Day earlier this year.

“I feel blessed to have been a part of every special event for him in his career,” she said.

This deployment will most likely be the only time they serve together in the same location, as Rue plans to complete her deployment early next year and then retire after 30 years of military service. Kenieth is looking forward to his future assignment as a platoon leader for Charlie Co., 1-1 ARB.

“I’ve done everything I’ve wanted to do,” Rue said, reflecting on her career. “My son can take over from here.”