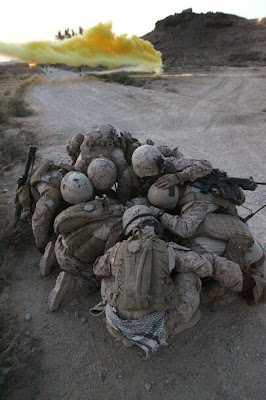 There's an ied wounded Afghan civilian under there, being protected by Coalition soldiers from the rotor wash of the Dustoff [rescue] & as the firefight continues. Dustoff aircraft are always targets. [got this from a brother today & thought you should see it & maybe say a prayer for these guys.]

This picture - one of my favourites - shows so clearly the difference between 'us' and 'them.' It also highlights the bs of those who would insist the current GLOBAL war on terror is 'Buuuuush's war...' As this picture of non-American troops - sent to me by a Dane - proves, troops from around the world stand shoulder to shoulder, to serve and protect..
Posted by The Brat at 6:56 AM