Freedom of Speech on trial today in Europe 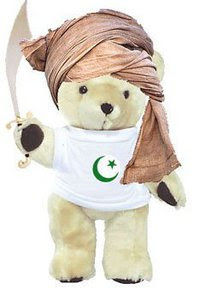 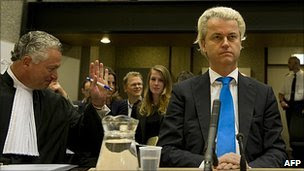 
The Dutch anti-Islam MP Geert Wilders has gone on trial in Amsterdam accused of inciting hatred against Muslims.

"I am on trial, but on trial with me is the freedom of expression of many Dutch citizens," he told the court. [emphasis mine]

The trial comes as Mr Wilders' political influence soars - he is set to be a shadow partner of the next coalition government.

Mr Wilders is facing five charges of inciting hatred and discrimination against Muslims....(more on the BBC here)

North Americans have long thought that what happens outside their shores - over there - has nothing to do with them. This 'trial' today in a small European country has EVERYTHING to do with us all. Mr Wilders may be defending his right to speak truth to the Danish people, in his own country, but anybody who believes that they can ignore the worldwide ramifications of this 'trial' is delusional. Take a look:

Anybody who has not been living under a rock these past few years has seen what this 'religion of peace' looks like in all its ugliness, as Islam has marauded across many of Europe's streets. Those incidents do not need rehashing here.

Think this has nothing to do with you living in North America? Think again...Some people have been paying attention, and documenting incidents of muslim extremism - examples of Islam's 'religion of peace' - on American soil.


That is just a small sampling. You can find the rest of that on The Religion of Peace.com

And these are just those 'incidents' we know about. Most times, these atrocities don't make the msm. I have previously shared with regular readers incidents of murder in Canada; incidents of the 'peace-loving' demonstrators in England calling for death of all infidels. When that nutcase in Florida threatened that he would/then he wouldn't burn copies of the Koran, 'peaceful' protestors took to the streets around the world, displaying their true colours for all to see. The muslim television station owner in America who beheaded his own wife got maybe 2 minutes of headlines. Remember Theo Van Gogh? Remember the cartoonist who had to go into hiding because of the 'peaceful' threats on his life?

Today is not the first attempt by Islamists to silence Geert Wilders, (check out his site here) and thereby cow us all into silent submission. No matter how this goes for Mr Wilders, it will not be Islam's last attempt to silence us all.

Try as I might, I have been unable to find example of any non-Islam (you know: all of us infidels) demanding the death, and/or beheadings of Islam followers, despite mountains of documented evidence of those very same 'religion of peace' sycophants demanding the violent demise of us all. These same Islamists who violently exercise their freedom of speech (as oftentimes the police just look on benignly,) would have the rest of us all be silent.

Mr Wilders is a very brave man. He stands for you, for me, for all of us as he stands in a small Dutch courtroom.

“This is about freedom of speech,” Wilders’ lawyer Bram Moszkowicz said. (here)