Cpl Simeon Tomlinson: From the Falkands to Afghanistan 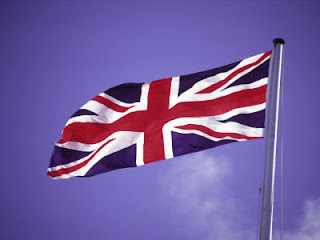 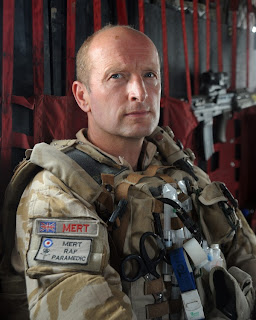 As my longtime readers know, I have a soft spot for Paras, and yes, medics also hold a special place in my heart. Out of England comes a story about a soldier who embodies both. Read on:

From Goose Green to the Green Zone

Ex Para turned RAF paramedic talks about his experiences which saw him in action at Goose Green in 1982 and the Green Zone, Afghanistan in 2010.

Cpl Tomlinson in the Chinook in which he works as part of the Medical Emergency Response Team (MERT)
Photo: Cpl Barry Lloyd/MOD
Crown Copyright/2010

Cpl Simeon Tomlinson ‘Tommo’ joined the Parachute Regiment gaining his coveted maroon beret in April 82, then immediately deployed with 2 Para as part of the Falkland Islands Task Force. He landed at San Carlos, weighted down by a mountain of personal kit that he would have to carry with him to be self sustaining for the weeks ahead. Leaping into waist deep, freezing cold, water in the middle of the night set the scene, he said: “It was one of the worst experiences; our feet didn’t get dry again!” Tabbing into Goose Green he was unaware that he was to experience some of the fiercest fighting of the conflict, he said of it: “It was hard graft, basic soldiering where we had 2 platoons forward in a long line abreast and just advanced on the trenches, then waited until you came under contact, went to ground, took the trenches out and moved on”.

After they had taken Goose Green, they regrouped and prepared to advance on Stanley. Tommo explained that the most important thing was to keep themselves and their kit serviceable. “I think the guys out here [Afghanistan] will appreciate that when you are living in such conditions, you constantly have to keep on top of your kit, your weapon and yourself. The actual fighting is quite a small element in the run things.”

The Chinook, Bravo November repositioned Tommo, as part of B Company, across Choiseul Sound before tabbing off for their next objective; Wireless Ridge. He explained that: “It wasn’t the intensity of Goose Green and we were quite fortunate in as much as the other units had a harder time on the ridges. Speaking of the mine threat, he said: “to be honest we weren’t aware of them until we were in a minefield and that’s not a very pleasant feeling. Fortunately we got away with it most of the time”.

Tommo left the Paras in 1985, married Sue and spent 17 years in computer systems development before deciding on a new challenge, he said “there was more to life, I’m one of these people who has to push things and do different things” and in 2003 He applied through the East Anglian Ambulance trust and trained to become a Paramedic. However, it was his fellow paramedic Jim Davies who discovered that 4626 Royal Auxiliary Air Force squadron at RAF Lyneham was actively recruiting Paramedics to deploy to the Medical Emergency Response Team (MERT) role.

Cpl Tomlinson in the Falkland Islands during the conflict.
Crown Copyright/MOD 1982

The motivation for joining 4626 Squadron was his experience serving with the Para’s: “The truth is you sit at home and you see the grieving parents. Knowing how my parents felt when I was at the sharp end and now being a parent myself, it hit home. The fact is I have a skill set and I genuinely wanted to help, this motivated me to join, I thought that hopefully I could contribute something.”

Tommo explains that while his job can be quite harrowing, “the rewarding aspect is being part of this whole team which starts with the blokes on the ground and ends up with the casualty being back in the UK within about 24 hours, you can’t beat that. It is a fantastic system and the guys on the ground deserve it.” (Read more here)

The UK MoD site has more on Cpl Tomlinson, and ends with this from him:

"I think the British forces medical care is something that we can be extremely proud of. The MERT is only a tiny element of the process, the way the aircrew operate to get us into these places, the force protection guys that look after us, people should be really proud of these efforts." (Read the rest of this article here)

Soldiers such as Cpl Tomlinson should make ALL Brits proud.

Thank you for your service, sir!
Posted by The Brat at 4:44 AM