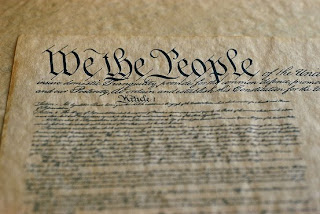 With days to go before the mid-term elections, for some Americans defence of the Constitution is what is at stake. Daren Gardner is riding across America. Almost at the end of his ride, he'll be in South Carolina on Tuesday, October 26th:

I, like most of you, would rather be going along with life as usual, but have found that to be extremely difficult for the last twenty-four months. I am a 50 year old small business owner, who loves God, my Family, my Country, and my Freedom. I have had to make a commitment, to either fight for our Freedom, or keep going and ignore the truth about what is happening in our country today, wondering can I make a difference.

January 2009, one year ago, I did decide to commit to step up, and dedicate my free time to make a difference. Well, as it has turned out, it has taken way more than my free time. I will also say, I would have it no other way.

This past year I have been to Washington, DC on no less than five occasions for rallies. I had not been to Washington D. C. five times in the last thirty years. As a common sense conservative, I consider myself a huge grassroots activist if you want to call me that. I used every chance I could, to be involved and be educated about the issues at hand. I have really felt like I was in a war, with many battles at hand. Winning them one by one, knowing another one was ahead to fight, all along making friends all across this great land.

Well, let me tell you, "WE THE PEOPLE" have made the difference. This war is not won on the back of one American, but on the backs of many. Because I love America, and the Freedom it stands for, and I will not sit back and watch our country be mandated, and force onto the citizens changes that are in direct conflict with the Constitution, The Bill of Rights, and The Declaration of Independence, our forefathers founded this country on. So, I ask you America, to support this Constitution Ride Across America, and come out and "Rally Up" when I ride into your state capitol.

And from my inbox:

I just wanted to let you know that I am organizing a Rally for the US Constitution on Tuesday Oct 26th at 3 pm on the SC State Capital Steps.
Daren Gardner is a small business owner who has ridden his motorcycle across the US stopping at State Capitals in 48 states to rally for the Constitution.

He will be here in SC on Tuesday October 26th. I was hoping you would be able to join me and to invite friends across the state to also join us.

We are reminding incoming Conservative political nominees hopefuls that the United States of America was founded on the Constitution, Bill of Rights and Declaration of Independence. I choose not to allow anyone elected to serve the people to be allowed to take those away rights from us citizens.
This is not a political rally- it is a political reminder.

Can you help spread the word of the Rally?

Will you post it to your FB pages? Email and or call media outlets? Can you volunteer to help me at the Rally? Do you know of a group, choir and or band who would play and sing a few Patriot songs? Please email me at my email I set up for this rally-
ConstitutionCarolSC@Gmail.com
Daren's Constitution Ride Across America has a website at www.CRAA2010.com

Get out there and make your voices heard, America!
Posted by The Brat at 4:42 AM