Freedom of Speech vs. Right to Murder in the name of religion 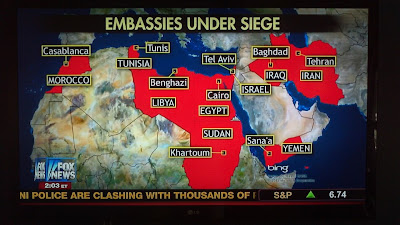 Freedom of Speech vs. Right to Murder in the name of religion

While these protests are NOT about a previously unknown and poorly constructed youtube video, the video has become a rallying cry for Islamism and an excuse for murder and attacks. The basic fact is that the US Government, nor any other government, had anything to do with the video. Not even Google or its subsidiary, YouTube, which hosted the video, had anything to do with the video. Unfortunately, Google did take the video down. I say unfortunately, because it was an act of appeasement and dhimmitude, not because the video was in any way a good thing.

Islamists have a goal of suppressing Speech and the current protests and murders demonstrate that. The call for protests by the Nour Party in Egypt show that the goal is to make it illegal in the entire world to say anything negative about Islam. The Nour Party, which is a more extreme Islamist party than is the Muslim Brotherhood, controls 20% of the Egyptian parliament, which is writing the new Egyptian Constitution. After attacking the US Embassy in Cairo, they raised the black flag of al-Qaeda, on 9/11/2012.

Islamism understands that it cannot convert others to its oppression, by any means other than force. It cannot convert others by use of Free Speech, but rather, only by threat of death. Islamism seeks to kill those that fail to conform to its dictates, hence a 14 year old mentally challenged Pakistani Christian was charged with a Capital crime when it was alleged that she burnt papers on which verses of the Koran were written. She literally faced the death penalty for burning trash.

While I do not defend the video, I do defend the right of the Coptic Egyptian refugees inside the United States to have made it. While I will say the video was poorly made, how can it be an insult to use the actual events written about in the Koran? Mohammed DID marry a pre-teen, while promising his friend, the father of the bride, that he'd wait until she had pubic hair. Mohammed did launch a bloody crusade that converted much of the Middle East by the sword. Mohammed did take multiple wives and did retain the "right" to take the wives of slain enemies as "war booty."...

Email ThisBlogThis!Share to TwitterShare to FacebookShare to Pinterest
Labels: Freedom of Speech at WOTN