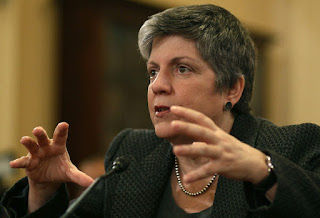 Colour me shocked. NOT! From Homeland Security NewsWire:

DHS secretary Janet Napolitano is under fire for two very different reasons as she is named in two separate lawsuits; the first lawsuit charges that two women executives Napolitano brought to DHS have mistreated male employees at the department; the second suit, brought by several ICE agents, charges that the administration’s deferred deportation executive order, which went into effect 15 August, force the agents face difficult choices while performing their tasks.

The lawsuit filed in Washington, D.C. federal court in May by James Hayes, a special agent in charge of New York City investigations for Immigration and Customs Enforcement (ICE), accuses two women executives at DHS of sexual harassment, and accuses Napolitano of promoting them because they are friends of hers rather than their merits and previous employment history and experience.

Before being assigned to New York, Hayes served in Washington, D.C. as the director of ICE’s detention and removal operations. He considered the move to New York as a demotion.


Nothing to see here, folks. Move along.

Email ThisBlogThis!Share to TwitterShare to FacebookShare to Pinterest
Labels: Napolitano focus of 2 lawsuits