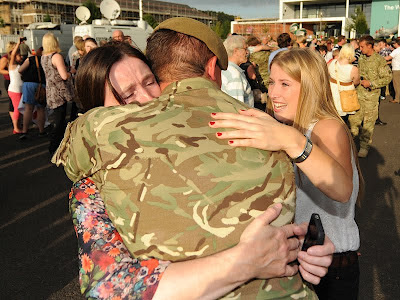 Soldiers from Corunna Company, 3rd Battalion The Yorkshire Regiment (3 YORKS), returned to Warminster on Tuesday, 4 September, after a six-month deployment to Afghanistan.

A total of 98 members of the company were welcomed home to Battlesbury Barracks in Warminster, Wiltshire, by several hundred waiting family members and friends and colleagues from 3 YORKS....

Much more of my favourite story here.

Email ThisBlogThis!Share to TwitterShare to FacebookShare to Pinterest
Labels: 3 YORKS home from AFG