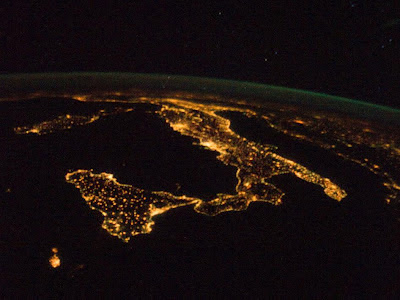 This oblique, night time panorama of much of Europe was photographed by one of the Expedition 32 crew members aboard the International Space Station flying approximately 240 miles above the Mediterranean Sea on Aug. 18, 2012.

The country of Italy is visible running diagonally southward from the horizon across the center of the frame, with the night lights of Rome and Naples being visible on the coast near the center. Sardinia and Corsica are just above left center of the photo, and Sicily is at lower left. The Adriatic Sea is on the other side of Italy, and beyond it to the east and north can be seen parts of several other European nations.

Email ThisBlogThis!Share to TwitterShare to FacebookShare to Pinterest
Labels: Italy via NASA