This decision goes beyond the absurd to the downright disrespectful. From Monkey in the Middle:

I Would Notice The Difference

The Veteran's Administration says that families cannot tell the difference between live and recorded music playing taps at military funerals. That it doesn't matter. 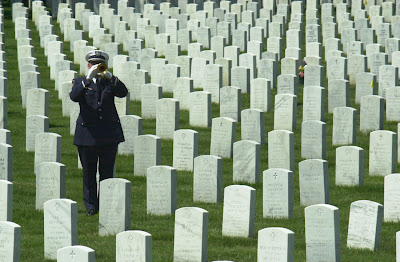 As budget cuts are set to silence live performances of Taps at military funerals in New York, one military bugler told FoxNews.com the iconic musical piece should always be performed by an Honor Guard musician.

Jari Villanueva, director of the Maryland National Guard Honor Guard and a bugler at thousands of military funerals, said having a phony hornsman hold up an instrument while a recording plays isn’t befitting of the somber task of burying a veteran. Yet, the piped-in version is what mourners will hear at virtually all New York military funerals beginning Oct. 1, due to a 25 percent reduction in federal funding for the state's Military Forces Honor Guard.

“Taps, when it’s played by a live, professional musician, is much better than having a machine play it,” Villanueva said Wednesday. “No matter how you think you can hold the instrument, it doesn’t really appear that you’re playing it.”

I had heard this a few days ago, and really, can't tell you how pissed off this makes me. Really, is this how our Veterans are to be honoured? Not damn well good enough, by any stretch.


Read the rest of this here.

Email ThisBlogThis!Share to TwitterShare to FacebookShare to Pinterest
Labels: Live Taps to be muted