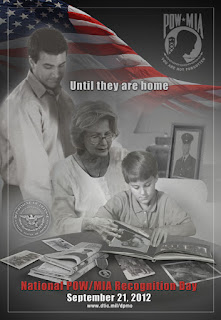 The United States’ National POW/MIA Recognition Day is observed across the nation on the third Friday of September each year. Many Americans take the time to remember those who were prisoners of war (POW) and those who are missing in action (MIA), as well as their families.

Many Americans across the United States pause to remember the sacrifices and service of those who were prisoners of war (POW), as well as those who are missing in action (MIA), and their families. All military installations fly the National League of Families’ POW/MIA flag, which symbolizes the nation’s remembrance of those who were imprisoned while serving in conflicts and those who remain missing.

Veteran rallies take place in many states on National POW/MIA Recognition Day. United States flags and POW/MIA flags are flown on this day and joint prayers are made for POWs and those missing in action. National POW/MIA Recognition Day posters are also displayed at college or university campuses and public buildings to promote the day. Remembrance ceremonies and other events to observe the day are also held in places such as the Pentagon, war memorials and museums.


From War On Terror News:

As a result of resolutions passed in Congress, the first official commemoration of POW/MIAs was in 1979, when the first national ceremony was held.  The observance is one of six days of the year that Congress has mandated flying of the POW/MIA flag, created by the National League of Families', at major military installations, national cemeteries, all post offices, VA medical facilities, the World War II Memorial, Korean War Veterans Memorial, the Vietnam Veterans Memorial, the offices of the secretaries of state, defense and veterans affairs, the director of the selective service system and the White House.

The DoD has more than 600 people dedicated to the worldwide mission of accounting for the more than 83,000 missing service members from conflicts as far back as World War II