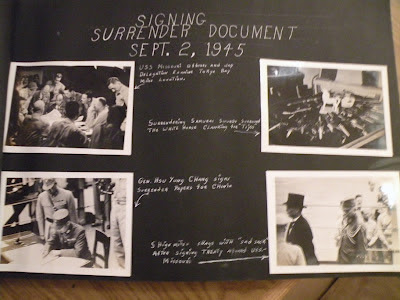 Japanese officials have signed the act of unconditional surrender, finally bringing to an end six years of world war.

In the presence of 50 Allied generals and other officials, the Japanese envoys boarded the American battleship Missouri in Tokyo Bay to sign the surrender document.

Within half-an-hour of the signing, a convoy of 42 US ships entered Tokyo Bay and landed 13,000 American troops.

The Supreme Commander of the Allied powers, US General Douglas MacArthur, briefly addressed the dignitaries on the deck of the battleship urging them to comply with the terms of the surrender "fully, promptly and faithfully".

He continued: "It is my earnest hope and, indeed, the hope of all mankind, that from this solemn occasion a better world shall emerge out of the blood and carnage of the past; a world founded upon faith and understanding, a world dedicated to the dignity of man and the fulfilment of his most cherished wish, for freedom, tolerance and justice."

Much more on the Beeb here.


There is so much more to be learned of this day in history, it would take me at least a book - or two - to share here. Fortunately, many historians have already written books.

There's a saying which goes something like: Those who forget history are doomed to repeat it.