Our Troops under attack - at home

A chilling reminder to all of us, that just because our Troops have made it home safely from War zones, does not mean they are immune from attack...

From the BBC today:


A teenager was arrested as he made his way to behead a British soldier, a court has heard.

Brusthom Ziamani, 19, was carrying a rucksack containing a 12-inch knife and a hammer, when he was arrested on a street in east London in August 2014.

The Old Bailey heard he idolised the killers of Fusilier Lee Rigby and had researched the location of Army cadet bases in south-east London.

Mr Ziamani, of Camberwell in south-east London, has pleaded not guilty.

Jurors heard Mr Ziamani had converted to Islam in early 2014 and his arrest came after he showed his ex-girlfriend the weapons, described Fusilier Rigby's killer Michael Adebolajo as a "legend", and told her he would "kill soldiers".

Prosecutor Annabel Darlow told the court: "He didn't say anything when he was arrested but he was remanded and told a security officer that he had been on his way to kill a British soldier at an Army barracks when he had been arrested.

"He said that he was going to behead the soldier and hold that soldier's head up in the air so that a friend could take a photograph with the severed head of the soldier."

I am sure the msm and politicians will try to spin this as a  'lone wolf, isolated incident' or some such rot, but this is not a one-off.  It IS yet another piece of the big picture that clearly shows what is going on in our countries.

Another out of UK in the last few days, via JihadWatch :

FEBRUARY 7, 2015
At the rate Britain is going, soon David Cameron will be ringing up these two gentlemen, apologizing for inconveniencing them, and presenting these two girls for beheading.

“Girl cadets threatened with BEHEADING by two men as they left an Army Reserve Centre,” by Hannah Parry, Mailonline, February 6, 2015

Police have mounted uniformed patrols around an Army Reserve after two girl cadets were threatened with beheading as they left the centre.

Two men had shouted the violent threats as they drove past the teenage cadets, who weren’t in uniform at the time.

The pair, driving in a Vauxhall Zafira, were said to have asked the girls if they were in the army before threatening them with beheading.

Police have traced the car, which is left-hand drive and appears to have foreign plates, and were trying to establish the identity of the occupants.

The driver was described as black or Asian, in his 40s, and of plump or muscular build with a black bushy beard and wearing dark clothes.
Clearly a Presbyterian....

Much more here, as further proof - for those who may still need it -  that political correctness will kill us all at home,  including our Troops.
This is NOT a new phenomenon.  Do NOT forget Fusilier Lee Rigby, whose barbaric beheading on the streets of London, near his base, should have been enough to shock anybody out of their political correctness. 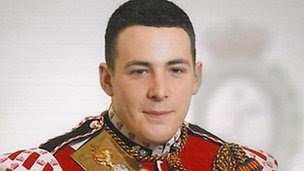 Britain is not alone in falling prey to these jihad attacks on home soil.  Just this past week, the US approved Purple Hearts for the Troops impacted by the Fort Hood attacks.  That attack on unarmed Soldiers was a direct result of deadly political correctness, since many had reported concerns to their superiors about the convicted killer.   I have written about that mass murder a few times. Look it up.  That is just one example of American Troops under attack at home, and there are more.
Canada is also not immune from these Islamist terrorists. (Yes, that IS what they are, and what I will continue to call them.)
Last October, the country watched horrified as we lost two of our own Troops, one of whom was guarding the War Memorial in Ottawa. 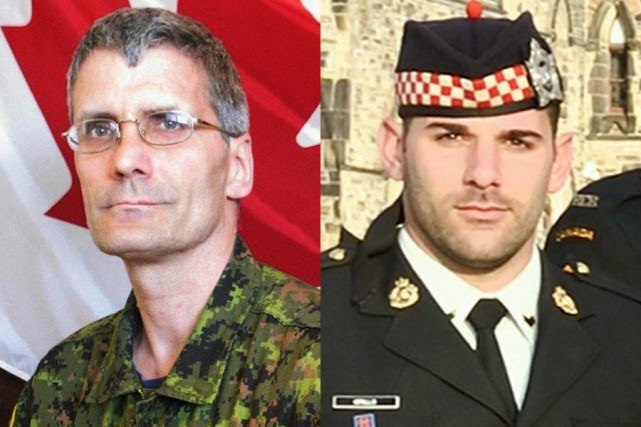 Patrice Vincent and Nathan Cirillo were murdered at home in Canada by a 'confused young man.'
In the aftermath of both those murders, it came to light that police were aware of both killers prior to their very public, deadly rampages.
Fact is, western countries are awash with Islamist terrorists who have sworn to kill all of us infidels.  It is also a fact that no matter how POTUS Obama would love to dismiss the threats by telling us all to get off our high horses,  refusing to fight back against this Islamist terrorist threat will kill us all.  It may be PC to call these murderers 'freedom fighters,' or whatever the current nom de guerre is for these thugs,
No matter WHAT our cowardly politicians choose to call them, time is long past when we need to confront and yes, destroy  these sycophants of the ideology that spews their terrorist doctrine. Our politicians continue to declare they "support the Troops."  Part of that support must be to ensure we eradicate the scourge within our shores, and ensure the safety of our Troops when they return from deployments. This must be a fight to the death - the death of this ideology that reveres death.  THAT would show true Troop support.

Related:  Suspect pleads not guilty in recruitment center shooting
(Hat Tip to This Aint Hell for the reminder)
Posted by The Brat at 6:37 AM