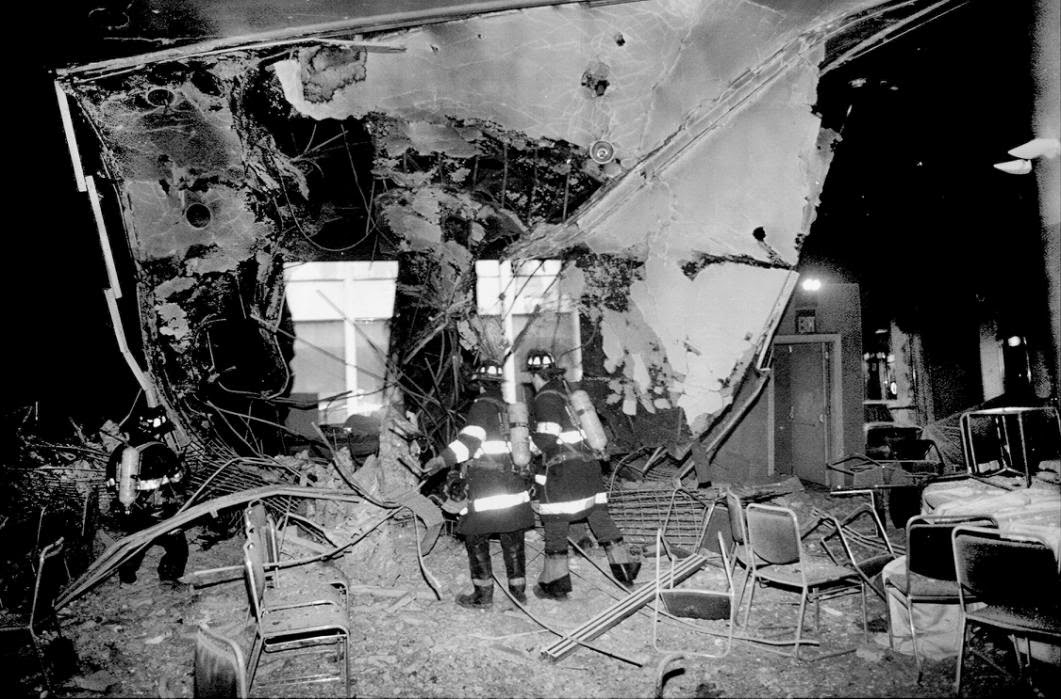 [On this day]at about 17 minutes past noon, a thunderous explosion rocked lower Manhattan.


The epicenter was the parking garage beneath the World Trade Center, where a massive eruption carved out a nearly 100-foot crater several stories deep and several more high. Six people were killed almost instantly. Smoke and flames began filling the wound and streaming upward into the building. Those who weren’t trapped were soon pouring out of the building—many panic-stricken and covered in soot. More than a thousand people were hurt in some way, some badly, with crushed limbs. It was Friday, February 26, 1993, and Middle Eastern terrorism had arrived on American soil—with a bang. 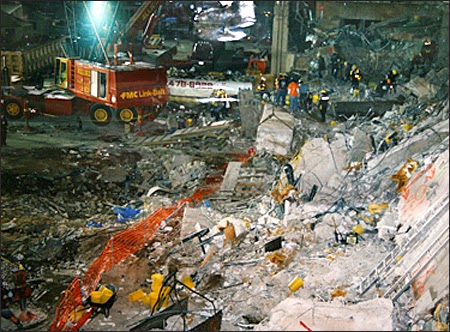 They’d have it soon enough.


The massive investigation that followed—led by the task force, with some 700 FBI agents worldwide ultimately joining in—quickly uncovered a key bit of evidence. In the rubble investigators uncovered a vehicle identification number on a piece of wreckage that seemed suspiciously obliterated. A search of our crime records returned a match: the number belonged to a rented van reported stolen the day before the attack.


An Islamic fundamentalist named Mohammad Salameh had rented the vehicle, we learned, and on March 4, an FBI SWAT team arrested him as he tried in vain to get his $400 deposit back. 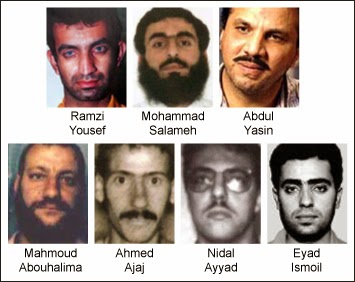 
The shockwave from the attack continued to reverberate....

For more from the FBI, go here.


[...] The FBI later called it the “largest by weight and by damage of any improvised explosive device that we’ve seen since the inception of forensic explosive identification.”


Six people died, including a pregnant woman. More than 1,000 others were injured, mostly from smoke that snaked its way up the stairwells and elevator shafts. As rescue workers dug for victims, survivors began making their way out by any means possible.

A woman in a wheelchair was carried down 66 flights of stairs by two friends. A class of singing kindergartners descended from the 107th floor. A group of engineers stuck in an elevator pried open the doors and then used car keys to cut a hole in the sheetrock walls leading out to a 58th-floor women’s bathroom. Nearly 30 people with medical conditions were taken to the roof and whisked away by police helicopter.


By late that night, the buildings had been completely cleared. They would not reopen for nearly a month.... 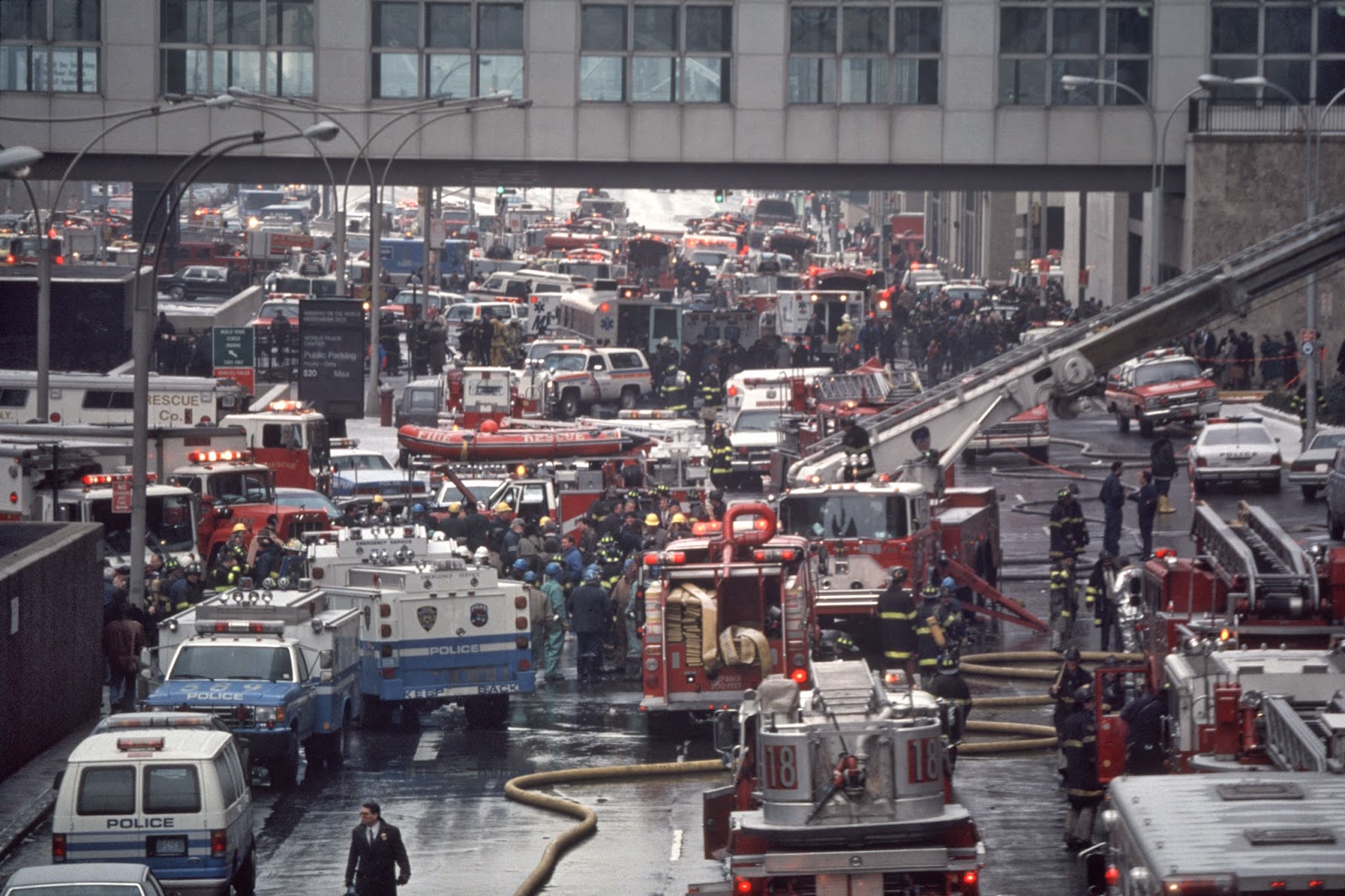 12:20 P.M. Emergency vehicles on West Street Emergency vehicles responding to the explosion jam West Street, which runs alongside the North Tower and the Vista International Hotel. Meanwhile, evacuees stream out of the World Trade Center complex. Photograph © by Allan Tannenbaum. All rights reserved.


At the National 9/11 Memorial, which opened on the tenth anniversary of the 2001 attacks, the six adult victims of the 1993 bombing are memorialized at the North Pool, on Panel N-73. The recovered fragment of the memorial fountain is on display inside the museum.


Remembering the Six Victims of the WTC 1993 Bombing

Names of the six victims of the Feb. 26, 1993 bombing are forever inscribed in bronze on the 9/11 Memorial at the World Trade Center site. (Amy Dreher photo) 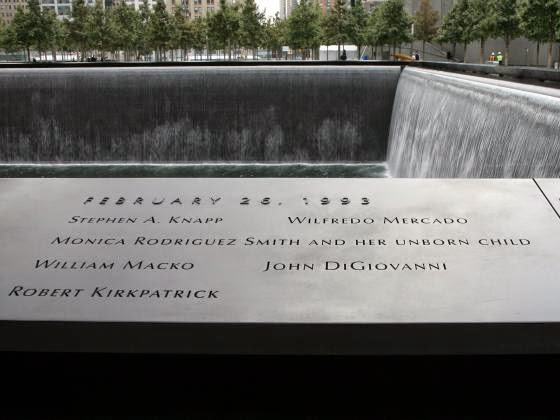 
Four of the six people killed in the attack worked for the World Trade Center's owner, the Port Authority of New York and New Jersey. Most of the victims were having lunch in their basement office, adjacent to the parking garage where terrorists parked their explosives-laden van.

Bob Kirkpatrick, 61, Steven Knapp, 47, and Bill Macko, 57, were mechanical supervisors for the transportation agency. Monica Rodriguez Smith was Macko's secretary. All were killed in the bombing.

The fifth and sixth victims were Wilfred Mercado, 37, who worked for the Windows on the World restaurant atop the North Tower and was checking in food deliveries in the basement, and John DiGiovanni, 45, a dental salesman who was in the parking garage when the bomb exploded.

Another thousand people suffered injuries. It took 11 hours to evacuate some 50,000 people from the complex.... 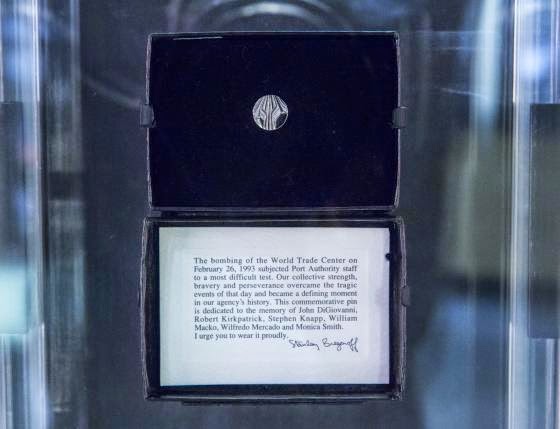 During the course of my research for this column, I read many, many articles of conspiracy theories,  - with accompanying videos -  political mudslinging, etc etc etc...ad nauseum.

Lost in all the fog is the indisputable facts that we lost SIX  American innocent lives as they went about their daily business.

Also, and most egregious to me, is the lessons either not learned from this outrageous terrorist attack on American soil, or a deliberate forgetting of those lessons; a deliberate sweeping under the rug, if you will.

As I read the constant  daily headlines from around the world on the scourge of today's terrorist threats, I am reminded that those who forget the lessons of history, are doomed to repeat them.

We must NOT forget, and we MUST learn.  To forget is to seal our future at the hands of terrorist thugs who work tirelessly for our destruction.

The memory of the victims of 1993 demand we REMEMBER.

BBC: On This Day

(I am sure my regular readers know my response to this 2013 article that swears:  His lawyer says he's no longer a threat )