Just when you think the current US administration can't get any more absurdly tone-deaf, it DOES!

I can't believe that there is anybody who still believes the myth that if only those poor, disaffected young 'uns had jobs, all would be unicorns and rainbows in our world., and peace would break out. The years-long evidence - including the most recent profiles of western-born ISIS wannabe terrorists - does not support that glib rhetoric. 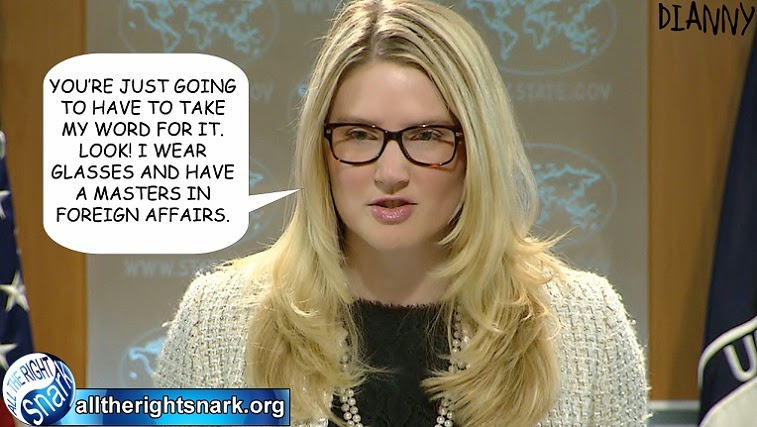 Found this picture of State Department Spokesman Marie Harf  here....  Go over and read their snarky response (filled with historically correct FACTS, by the way.)

I wanted to know who this woman is, making such 'official' pronouncements, and guess what?  She actually does claim a Masters degree in Foreign Affairs:

Ms. Harf received her Master’s degree in Foreign Affairs from the University of Virginia, where her thesis evaluated the prospects for continued regime stability in Saudi Arabia. She graduated with honors from Indiana University, earning a Bachelor’s degree in Political Science with concentrations in Jewish Studies and Russian and Eastern European Studies.


This, of course, adds fuel to the street smarts - v - academics debate that I have been part of lately...[Full disclosure:  I also wear glasses, and yes, I do have an academic background -  although my own claims to foreign affairs did not get academic recognition. But I digress .]


Quite apart from how foolhardy, how dangerous such comments are, the ongoing ineffectiveness of the US  non-existent foreign policy has not gone unremarked on both across the US, and globally.

JihadWatch can always be counted upon for incisive analysis:


In reality, it’s an unpleasant fact, but killing the enemy is indeed how wars have historically been won.  [emphasis mine] Never in the history of the world has a war been won by alleviating the poverty of the enemy. And while even Chris Matthews finds this hard to swallow here, this is Obama Administration policy, and it was Bush Administration policy before that. The Washington establishment, both Democrat and Republican, believes that poverty causes terrorism, and that giving money to countries from which terrorists come will ultimately eradicate terrorism. There are three problems with this: first, study after study has shown that jihad terrorists are wealthier and better educated than their peers; second, this has been tried for years, with billions pumped into Pakistan, Afghanistan, Iraq, and other countries, and it has failed: the problem of jihad terrorism is worse than ever; and third, the jihad terrorists believe they are warriors of Allah, the Lord of the Worlds — the noblest calling on earth. Does Marie Harf really think that they would give that up for a chance to say, “Would you like fries with that?”


There is much more in that same tone, here.

Barack Obama’s post-midterm second term continues to be enlightening. Mostly the president has been spending his time confirming conservative critiques of his presidency. But he’s also been demonstrating, as I wrote last week, startling ignorance. And the latest example comes from State Department spokeswoman Marie Harf, who last night enlightened MSNBC’s viewers by revealing why Obama’s attempts to stop ISIS have been so disastrous.


It turns out that the Obama administration believes two very silly, discredited tropes about terrorism and violence. ..


And getting terrorism wrong is significant. Additionally, it has long since ceased being enjoyable to correct the purveyors of Harf’s “root causes” fallacy regarding the economic motivations of terrorist recruits. This is the national-security version of a flat-earther. We use flat-earthers as an example; we don’t actually still engage with flat-earthers, if there are any left. There’s nothing fun about rehashing an argument your side won long ago....


But Harf can’t be dismissed or ignored, because she speaks for the Obama administration...[And THERE'S the rub]


Which raises a broader question: Where does Obama find all these staffers who are so far removed intellectually from the issues they deal with? To populate an administration with such incompetents, you’d almost have to go back in time. Perhaps the most impressive aspect of the Obama administration, then, is how easily Obama has been able to find fellow dissenters from reality....
[...]

The other part of Harf’s statement is likewise absurd: “we cannot win this war by killing them.” Harf might be surprised to hear this but yes, you can win wars by succeeding on the battlefield. It’s happened before, I swear. Wars have been won–quite a lot of them, in fact–by defeating the enemy. Maybe it sounds too obvious to be true. Could it really be that simple? You can win a war by winning a war? Wonders never cease....[emphasis mine]

Yes, sometimes the obvious really IS that simple. There is much more, including a transcript of the offensive Harf interview, here.


The UK's Daily Mail also got in on the smack-down, of course.

The Obama administration is drawing fire for suggesting that defeating ISIS requires more of a jobs program for terrorists than a sophisticated approach to killing them.


State Department spokeswoman Marie Harf said Monday night on MSNBC that 'we cannot win this war by killing them, we cannot kill our way out of this war.'


Instead, she said, the administration should 'go after the root causes that leads people to join these groups' – including 'lack of opportunity for jobs.'


'We can work with countries around the world to help improve their governance,' Harf insisted. 'We can help them build their economies so they can have job opportunities for these people.'


The embarrassing gaffe aired as the White House attracted new criticism for papering over religious aspects of a mass-beheading of Coptic Christians by the ISIS terror army....

There is much more of the same here.

In the last six years the US administration has proved that 'embarrassing gaffes' cost lives.
That is more than embarrassing, it is inexcusable.

Enquiring minds must ask how many job fair booths will be at the three day conference on generic terrorism (don't you DARE say 'Islamist Terrorism')  now under way in Washington, DC.

God help us all.

Related (and as always, read the comments too): Marie Harf; we need a jobs program for ISIS