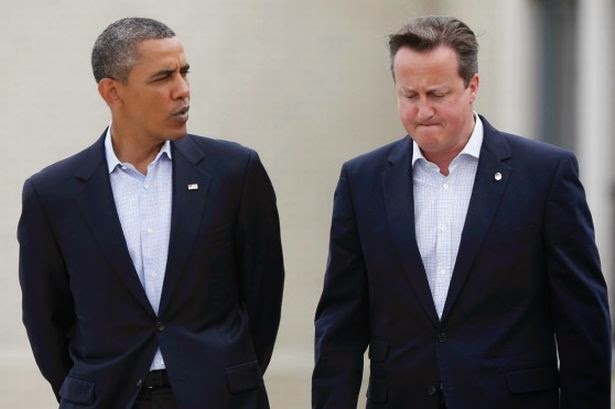 
Isn't THIS rich coming from the Commander in Chief whose slashing of the US Defense budget (unless it involves the greatest threat of all time - climate change) has dragged US defense capabilities to dangerous levels.


From the UK Telegraph:


US President warns David Cameron that if Britain fails to meet its 2 per cent of GDP defence spending target, it will set a bad example to other European nations

Barack Obama has told David Cameron that Britain must stick to its Nato spending target, or set a damaging example to its European allies.


In a blunt warning not to cut the UK defence budget, the US President personally insisted to the Prime Minister that a failure to hit the 2 per cent of GDP spending target would undermine the military alliance.


The American President made the direct appeal during private meetings when the Prime Minister visited Washington last month.


Military leaders fear the Treasury will try to claw back a fresh £1 billion a year from the Ministry of Defence budget to try to fill Britain’s stubborn budget deficit.


Yet he has refused to commit Britain to the target beyond next year and defence spending is forecast to drop to around 1.7 per cent by 2020, even without further cuts. The Ministry of Defence budget is now also seen as the most vulnerable in Whitehall to a Treasury raid, after the main parties said they would protect spending on aid, pensions and the NHS....

Much more here, and it IS interesting.

As one would expect, the MoD and UK politicians are not taking that without returning fire, and this morning sent  out this salvo in response:


Defence budget
This morning the Daily Telegraph and the Daily Mail report that President Obama has warned Prime Minister David Cameron not to cut the UK defence budget. According to the papers, Mr Obama made the direct appeal during face-to-face private meetings when the Prime Minister visited Washington last month.

In response to this story a Downing Street spokesperson said:


“With the second largest defence budget in NATO and the largest in Europe, the government is committed to spending 2% of gross domestic product (GDP) on defence. Decisions on spending after the financial year 2015/16 will be determined in the next spending review.


“Over the next decade we are committed to spending £163 billion on equipment and equipment support to keep Britain safe. That includes new strike fighters; more surveillance aircraft; hunter killer submarines; two aircraft carriers; and the most advanced armoured vehicles.


“During the Prime Minister's recent visit to Washington, the President made the point that the US greatly appreciates that the UK currently meets the 2% target.”


Also on defence spending an Institute for Strategic Studies report has been published this morning titled ‘The Military Balance 2015’. The report contains region-by-region analysis of the major military and economic developments affecting defence and security policies, and the trade in weapons and other military equipment. The report contains a ranking of the world’s top-15 defence spending nations and this year’s report shows that we have maintained our position of fifth in the ranking table with Saudi Arabia and Russia switching places to third and fourth respectively. The figure attached to the UK has risen from $57 billion (US) in 2013 to $61.8 billion (US) in 2014.


In response to the report the Defence Secretary Michael Fallon said:


“Under this government the UK has one of the largest defence budgets in the world to help keep Britain safe. We are committed to spending 2% of GDP on defence this year and next with decisions on future spending to be determined in the spending review.


“We are investing over £160 billion on equipment over the next 10 years including new strike fighters; more surveillance aircraft; hunter killer submarines; 2 new aircraft carriers; and the most advanced armoured vehicles.


“The UK remains a global military power with more than 90,000 servicemen and women deployed last year on over 300 commitments in 50 countries. We are making the second biggest contribution to the campaign against the Islamic State of Iraq and the Levant and have 750 military personnel in Sierra Leone to help fight Ebola.”


The UK government is spending 2% GDP on defence and has consistently met and indeed exceeded this NATO Guideline and is one of only 4 countries to do so alongside the US, Estonia and Greece. The UK also exceeds the NATO guideline to spend 20% of the defence budget on new equipment. Like all other government departments, the budget for defence beyond 2015-16 will be set in the next Spending Round, in the meantime the Treasury has agreed a commitment to 1% real terms annual growth in the Defence Equipment Plan, from the 2015-16 baseline, providing investment in the vital equipment needed to deliver the MOD’s Future Force 2020.


Anybody paying attention to our Troops and Veterans in either the UK and the US (and Canada) knows very well that each of those countries is slashing Military budgets to - some say - pre-WW2 levels, even as we should be using all resources to continue the Global War on Terror.

Whatever the truth of these inner machination of the various Defence Departments, I have some advice for POTUS:  Put your own house in order,and pay attention to your own Military advisors before you start 'warning' others what they should be doing.