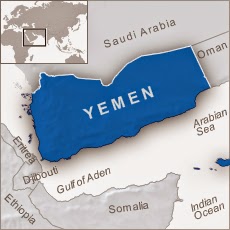 Yemen in chaos: Portrait of an Obama 'success' story
Feb. 11, 2015 - 2:47 - A few months ago, the president was touting Yemen as a model of his foreign policy success. Today, armed rebels seized US embassy vehicles after diplomats fled the country over growing unrest.

How's that working out for you, Mr. President?

The US, UK and France are closing their embassies in Yemen due to the deteriorating security situation and political crisis in the country.

The US and UK governments have withdrawn diplomatic staff from Sanaa and urged their citizens to leave.

France's embassy in the capital has announced that it will close on Friday.

The moves come as the UN attempts to broker talks between political factions and Shia rebels who control Sanaa and dissolved parliament last week.

President Abdrabbuh Mansour Hadi and his cabinet resigned on 22 January after the rebels, known as Houthis, overran the presidential palace and placed them under effective house arrest.

The Houthis have taken over predominantly Sunni parts of central and western Yemen in recent months, sparking battles with tribesmen and al-Qaeda in the Arabian Peninsula (AQAP), after advancing from their stronghold in the far north and seizing Sanaa in September....

I *may* be over-suspicious, but I don't believe in coincidences. Just last month was this:

Yemen is back in the spotlight in the wake of the Paris terror attacks. One of the suspects traveled there in 2011 and met with the radical American cleric Anwar al-Awlaki. Al Qaeda in the Arabian Peninsula, based in the region, claimed responsibility for the attacks.


Though the administration technically has lifted a ban on sending Guantanamo detainees to Yemen, the U.S. traditionally has balked at repatriating prisoners back to the country, where the government is battling the Al Qaeda insurgency.


Madness and mayhem is certainly not a new phenomenon in Yemen.  War On Terror News has been chronicling terrorism in that country for the last few years.

Sadly, this was all too predictable:

The Pentagon said the Marines destroyed heavy weapons in their embassy arsenal, including machine guns, before leaving for the airport but remained armed with smaller weapons until the end to ensure a safe exit from the country.

"The movement from the embassy to the aircraft required armed Marines," Army Colonel Steve Warren, a Pentagon spokesman, said at a briefing.

The U.S. embassy closure and the evacuation of embassy personnel came after the Houthi militia group - which overran Sanaa in September - formally took power last week. The Shi'ite Muslim group is stridently anti-American and is backed by Iran.

A U.S. official, speaking on condition of anonymity, estimated that about 100 Marines made up the embassy contingent that left the country.

Asked whether the Marines turned over their weapons to Houthi fighters, Warren said: "It's unclear, frankly. We believe they turned them over to government officials at the airport, prior to boarding the aircraft."...


What the HELL?   "It's unclear, frankly. ..."   Go read the rest here.
Frankly, just about everything about the current administration's foreign policy is unclear, except to terrorists around the world, of course.  THEY have wasted no time taking full advantage of the hashtag diplomacy crowd.
God help us all.

Saudi Arabia closes its embassy
Posted by The Brat at 9:23 PM