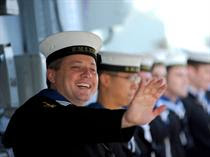 HMS Kent's ship's company were excited to see eager family and friends waiting on the jetty, pleased to be reunited in time for Christmas
[Picture: LA(Phot) Owen King]

The crew of HMS Kent arrived home just in time for Christmas when the ship sailed in to a royal reception at Portsmouth this week, after returning from a six-month deployment to South East Asia and the Far East.

His Royal Highness Prince Michael of Kent, brother of the ship's sponsor, Princess Alexandra, and Honorary Rear Admiral of the Royal Naval Reserve, met the Type 23 frigate when she anchored in the Solent on Monday 15 December 2008. The Prince spent a couple of hours on board and met some the 174 crew before the ship began her short journey into Portsmouth Naval Base.

HMS Kent sailed from the UK on 1 June 2008 and visited China, Japan, Indonesia, Sri Lanka and many more countries, demonstrating the UK's ongoing commitment to the region.