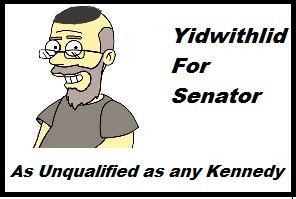 Dear Governor Patterson:
The rumor is that you are going to submit to the will of the national democratic party and appoint Caroline Kennedy as NY State Senator. My recommendation sir, is that you reject the party's pressure and embrace the Politics of Change DO NOT APPOINT CAROLINE KENNEDY AS the Senator from NY, Pick ME, Yidwithlid.

I'm very serious. My qualifications are just as strong as Ms. Kennedy, If not Stronger, In fact some would say that I am just as unqualified to be Senator as Caroline Kennedy:

I can save the State Money- Guaranteed ! Ms Kennedy was born with the silver Kennedy Spoon in her mouth. I am out of work and get NY State Unemployment. If I'm appointed I will no longer need that Unemployment Check--I promise.

Background? Both Caroline and I are devout in our faiths. I am Jewish, Kennedy is married to a Jew and thus, Jewish by insemination.

Job Training Ms Kennedy is a Lawyer by trade, I have 30 years in marketing. There are already too many lawyers in Congress, I already twist facts for a living.

Caroline Kennedy will bring the same old Kennedy perspective to Washington, I will bring diversity of Opinion, to the Senate. The same sick warped opinions I bring to this blog.
A Kennedy appointment will reek of nepotism. If Caroline Kennedy is appointed to the New York Senate seat — once held by her uncle, Sen. Robert F. Kennedy — she would be joined in Congress not only by another uncle, Sen. Ted Kennedy, but also by her cousin (his son) Rhode Island Rep. Patrick Kennedy ....

With great fanfare, earlier this week I threw my hat in the ring for the open NY Senate Seat.

Since then the Mainstream Media has shown its true bias. They were all over the story of Ms Kennedy, not ONE mention of Yidwithlid. They even covered and praised Caroline's Lunch with Al Sharpton. AL SHARPTON ???? For Pete's Sake !! She wants to be senator and she is having lunch with AL Sharpton--- a professional BIGOT. OH MY GOD !

Governor Paterson I understand the severe pressure you face. When President-elect Obama didn't give Ms Kennedy the job she wanted (UN Ambassador) you were stuck with "paying off" Caroline and her Uncle Ted with the NY Senate seat.

Just to show you what a wonderful problem solver I can be as Senator, here is a solution for you to get out from under the pressure AND to solve another Democratic party problem. If you suggest this you will look like a party superstar. Tell Obama to give Ms Kennedy the Illinois Senate Seat. That's right, Illinois. Its a great solution...


Politics in America is NEVER dull! For the rest of this piece, go here.
Posted by The Brat at 2:17 AM

Email ThisBlogThis!Share to TwitterShare to FacebookShare to Pinterest
Labels: YidWithLid For Senator