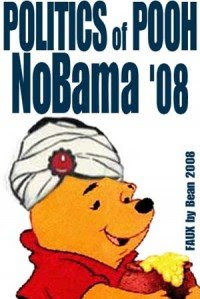 I have resisted thus far getting into the case of the Obama fake birth certificate, and the implications of that whole mess. So many other sites have been following the twists and turns, I saw no need to add my 2 cents. However, today I found this and it was just too good for to NOT to share with you all. I also would trust Winnie the Pooh over Obama any day. From Canada Free Press comes this:

It was Richard Danzig, Navy Secretary under President Bill Clinton, now touted as National Security Adviser in an Obama White House, who told the Centre for New American Security: “Winnie the Pooh seems to me to be a fundamental text on national security.”

According to Israelinsider, “It is now a certainty that the “birth certificate” claimed by the Barack Obama campaign as authentic is a photoshopped fake.”

“The image, purporting to come from the Hawaii Department of Health, has been the subject of intense skepticism in the blogosphere in the past few weeks. But now the senior spokesman of that Department has confirmed to Israel Insider what are the required features of a certified birth document—features that Obama’s purported “birth certificate” clearly lack.

“That strongly suggests that Daily Kos obtained the image from Photobucket, not the State of Hawaii, the Obama family, or the Obama campaign. Photobucket is not generally known as a credible supplier of official vital records for any of the fifty states, and the liberties that other Photoshoppers took with the certificates confirms this.

“Some of these oddities surfaced in Israel Insider’s previous article on the subject, but new comparative documentary evidence presented below, and official verification obtained by Israel Insider from a senior Hawaiian official, provides the strongest confirmation yet.

“An authentic Hawaiian birth certificate for another Hawaiian individual has since surfaced which, using the same official form as the presumptive Obama certificate, includes an embossed official seal and an authoritative signature, coming through from the back. Obama’s alleged certificate lacks those features, and the certificate number referencing the birth year has been blacked out, making it untraceable.

“Compare the top image presented by his campaign as evidence of Obama’s 1961 birth and the other certifying the birth of one Patricia Decosta....

And there is more compelling evidence, over at Canada Free Press here.

Seems to me it is long past time when Obama needs to take himself off to Pooh's Thotful Spot!