Nineteen 3rd Special Forces Group soldiers received the Silver Star Medal during a Valor Awards Ceremony in the JFK Auditorium at Fort Bragg, N.C., Dec. 12, 2008. The Silver Star is the 3rd highest military decoration that can be awarded to any member of the United States Armed Forces. Photo by Cpl. Sean Harp 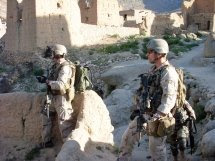 Members of Operational Detachment Alpha 3336 of the 3rd Special Forces Group (Airborne) recon the remote Shok Valley of Afghanistan where they fought an almost seven-hour battle with terrorists in a remote mountainside village. Photo by Sgt. David N. Gunn 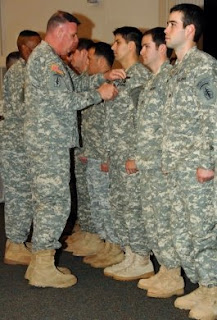 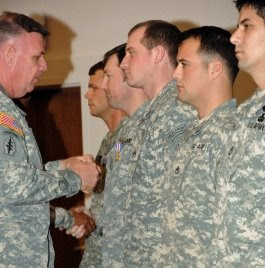 
Not one hero today, BUT 19 very special heroes:

"It is my distinct honor and privilege to celebrate the awarding of these medals to our intrepid warriors," Benton said. "History will record and we will long remember their sacrifices."

Addressing the standing-room-only crowd, Benton said that earlier this week the group had the honor of awarding 43 Bronze Stars for Valor and 39 Army Commendation Medals for Valor....

And there is more. Please go here to read the rest of this article. THEN go read the details of what these amazing men did:

The story behind the Silver Stars

There are no roads leading into the Shok Valley. The village, which stands sentinel over the valley, is home to one of the fiercest of the insurgent forces in Afghanistan - the Hezeb Islami al Gulbadin, or HIG.

On April 6, 2008 a daring raid into the stronghold by Afghan Commandos and their Special Forces counterparts tested the mettle of the Afghan forces and further forged the bond between them and their SF brothers....

When you ask them to use one word to describe April 6, their words pop, much like the gunfire that rained down on them.

"Baptism by fire," said Staff Sgt. Daniel Plants, "it was my first firefight."

More words followed as the team went back in their minds to that day.

The team was assigned to take out high-value targets within the HIG. The insurgent group was entrenched in the valley and was guarded by a number of highly-trained foreign fighters. The sheer number of weapons and amount of ammo used by the insurgents led the team to conclude that they had been stockpiling the weaponry within the fortress-like village since the Russian invasion of the country during the late '80s.

Accompanying the team that day was a group of Afghan Commandos. "We have such a big rapport with the commandos we've trained," said Staff Sgt. Luis Morales, the team's intelligence sergeant. "They have such a loyalty to us. They try as hard to protect us as we try to protect ourselves."

"We eat, sleep and train with these commandos," said Capt. Kyle Walton, the detachment commander. "We die with them, too. These guys are close friends to us. At the outset of the attack, I lost my interpreter, and we were as close as anyone."

The interpreters hold a special place within the team. "They are just like a member of the team," said Morales. "One of our interpreters has seen as much combat as any of us. He has six years of combat experience. He's been with six SF teams and been in hundreds of firefights - but he doesn't get the six-month break. ...

You know there is more. Go read the whole story here.


Honored during the ceremony with Silver Star Medals were:

The members assigned to ODA 3336 for valorous actions undertaken in Afghanistan on April 6, 2008:

The Silver Star Medal is awarded in recognition of a valorous act performed during combat operations while under direct fire from enemy forces. It may also denote an accomplishment of a heroic nature in direct support of operations against an enemy force.

Mulholland said that he was "incredibly humbled" to stand and address the actions of his men, because their actions "speak volumes beyond what I can say."

"Day-in and day-out, they are the unsung heroes, seeking no recognition," he continued. "If you asked them, I'm sure they would say: `the other guy did it.'" (source) [my emphasis]

Or they would probably say "Just doing my job"! How blessed we are that such men do their "job" so well. My grateful appreciation to ALL of them.
Posted by The Brat at 5:15 AM