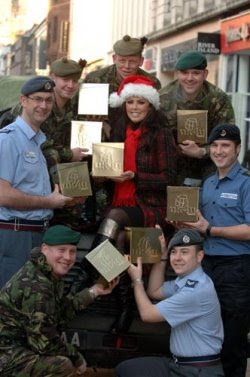 Santa Even Delivers Presents To Royal Marines In Afghanistan

Almost 25,000 'square stockings' are winging their way to war zones and British bases overseas, as presents for troops on Christmas day. Miss UK and panto star Nieve Jennings, plus Marks and Spencer, are backing the campaign to bring festive cheer to forces personnel on operations away from their loved ones at Christmas. This year 700 Royal Marines from Scots-based 45 Commando will all receive a square stocking, at their base in Helmand province.(source)

Winnipeg, Manitoba – As Christmas gets closer, the Canadian North American Aerospace Defense Command (NORAD) Region has put the finishing touches on plans to track and escort Santa Claus when he visits Canada by naming four CF-18 fighter pilots as his official escorts.

Major Kirk Soroka and Captain Dan Walters of 4 Wing Cold Lake, Alberta., and Captain Benoît Bouchard and Captain Matthew Maurice of 3 Wing Bagotville, Quebec, will take on the responsibility of welcoming Santa when he arrives in Canada on his annual Christmas Eve journey, and escorting him safely through Canadian airspace.

Special NORAD SantaCams, positioned around the world, will take photos and video of Santa and his sleigh as he journeys around the world. The SantaCams instantly download the photo and video imagery so that it may be viewed by children worldwide on the NORAD Tracks Santa website, www.noradsanta.org, on December 24. All of this information will be available in English, French, German, Italian, Japanese, Spanish and Chinese.

In coordination with the North Pole, NORAD has been informed that Santa intends to begin his journey at 6 a.m. EST, on Dec. 24. The Canadian Air Defence Sector Operations Centre at 22 Wing in North Bay, Ontario, will alert NORAD when their radars detect Santa approaching North America. Two CF-18 Hornet fighter jets from 3 Wing will welcome Santa as he enters Canadian airspace off the coast of Newfoundland and Labrador. As Santa flies across Canada from east to west, two CF-18 Hornets from 4 Wing will escort him out of Canadian airspace and turn over escort duties to the Continental U.S. NORAD Region so that he may continue his Yuletide trip...