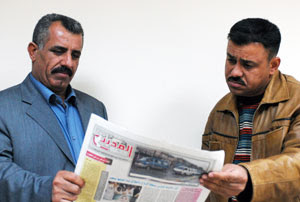 Freedom of the Press in Sadr City

BAGHDAD — A monumental achievement was accomplished recently in the highly populated Baghdad district of Sadr City, with the publication of al Medina, the first ever local newspaper.

Al Medina is a locally produced and locally owned newspaper that focuses on current news affecting the people of Sadr City.

“It is a source to express their ideas, report their activities, and cover all the projects in the area” said Mr. Muhammad al-Tamimi, general manger of al Medina newspaper.

The paper was conceived more than five months ago when Maj. Mike Humphreys, a public affairs officer with Multi-National Division – Baghdad, had a chance encounter with Muhammad, a journalist, and a Sadr City businessman, Dhahir al-Musa.

During their initial meeting Humphreys, a native of Greeneville, Tenn., expressed his vision to create an independent SadrCity newspaper that could get the people’s message out. In cooperation with the embedded Provincial Reconstruction Team 3, Humphreys offered $25,000 in quick reaction funds to help the two entrepreneurs get their paper started.

“I knew we needed a paper in Sadr City,” Humphreys said. “I believe that one key to success in Iraq is a free and independent press that educates and informs the people while holding government officials accountable.”

Dhahir, who currently owns the newspaper, and Muhammad graciously accepted Humphreys offer and have already begun putting that money to good use. As of today al Medina newspaper has produced six issues at 10,000 copies each that have been distributed throughout the Sadr City District.

“If god willing the paper will continue to grow” said Muhammad. “The people of Sadr City have suffered. This paper can be their voice so the government does not forget them.”..(source: MNF-1 here)