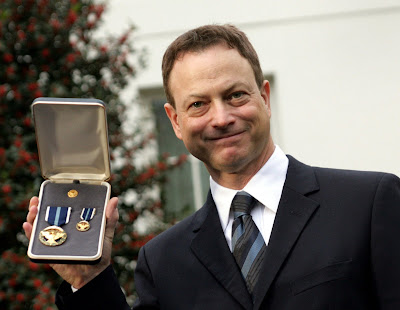 Sinise: A man for all services

Since war became a geographically distant but very real way of life after Sept. 11, 2001, no Hollywood star has stepped up to support active duty U.S. military personnel and wounded veterans like Gary Sinise. There is no close second. And quietly, as is in his nature, he is becoming something akin to this generation´s Bob Hope.

One step in conferring this worthy title on the award-winning actor, director and producer occurred last week when President Bush bestowed on him the Presidential Citizens Medal, the second highest civilian honor awarded to citizens for exemplary deeds performed in service of the nation. Previous recipients include Henry "Hank" Aaron, Muhammad Ali, Colin L. Powell and Bob Dole.

While the White House ceremony flew under the radar of most of the media, most notably the entertainment press, word has trickled out to many of his countless admirers in and out of the military. And on the occasion of him receiving the award, they want America to take in their words of praise for, as Sharon Tyk in the USO of Illinois put it, this "gallant American patriot."

Michael Yon, a Special Forces vet and the pre-eminent war journalist of our time, communicated his admiration in a dispatch from Bahrain: "Gary is a true friend of the American soldier. He does not hesitate to travel into war zones to express his admiration and personal support for those who defend us. He visits wounded soldiers, some of whom I personally know. All love him....