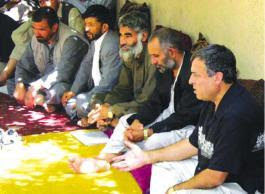 Tooryalai Wesa, 58, fled Afghanistan in 1991 and settled in Coquitlam, B.C, Canada. Today, he takes up a new post as Governor of Kandahar.

"Some of the Afghans are trying to come back because we want to help the country and because of the lack of the professional people" in the country, Wesa told CTV Newsnet Thursday in a telephone interview from Kabul, Afghanistan.

Born and raised in Kandahar, Wesa has extensive work experience in the province and feels that he can be an effective link between the local population and the international force of soldiers, diplomats and aid workers currently posted there.

"I feel that there's a huge demand for professional people there and these people need help," he said.

The posting has extra significance for Canada since most of the country's 2,750 troops are stationed in the volatile province.

"I want to be a bridge between these two homes that I have," said Wesa, adding that improving security and infrastructure in the region are very high on his list of priorities....(source)

A PhD, his thesis was on the impact of the Soviet Union's occupation, and the "devastating impact" it had on the country's agricultural infrastructure, according to his biography, which is posted on the UBC website. Today, he is an associate researcher at the University of British Columbia. At least he was until yesterday. As the previous Governor of Kandahar was pushed out, Wesa brings a wealth of knowledge to what some see as a tenuous position in Kandahar.

Among his academic credits, the Afghanistan-born Wesa is an agricultural expert who has worked with both Canadian military and civilian authorities in Kandahar to develop rural initiatives in the region and strengthen local governance.

An online CV states he received a PhD in Adult Education from UBC in 2002, and a master's degree in agricultural education from the University of Nebraska-Lincoln in 1977. He graduated with a Bachelor of Science from Kabul University in 1973.

Since 2004, Wesa has worked as associate researcher at UBC'S Institute of Asian Research.

He is fluent in Pashto, Dari, Farsi and English, and speaks German and Arabic. (Canada.com)

On paper, he seems more than qualified to be Governor of Kandahar, which - no coincidence - is the area where most of Canada's approximately 2,700 troops are based. Wesa is an agricultural expert who has worked with both Canadian military and civilian authorities in Kandahar to develop rural initiatives in the region and strengthen local governance.

Already today, Wesa has met with the tribal elders from the region. Canada's top soldier says the fact that Wesa has no background in security matters is "no big deal." It may well be that Wesa is part of a bigger repatriation as exiled Afghanis return to the land of their birth, eager to share their skills, knowledge and talents to rebuild the country.

"We look forward to working with him to strengthen the bonds between Kandaharis and their government, including by helping the government to deliver essential services and maintain law and order," Golberg said in a statement. (source)

Can he be a "bridge" between his two countries? He seems optimistic, confident that he can contribute:

I know firsthand how much our Canadian troops believe in their mission. My hope is that with this new Governor in Kandahar - who has an understanding of the many levels needing to be addressed in the country - Afghanistan will seize this golden opportunity and progress further towards a self-sustaining, viable democracy.

How cool that he is willing to go home and help his fellow citizens restore A'stan.
Let's hope and pray that he will be able to achieve success with all that has been happening in Kandahar.

Yeah, I'll continue to pray for all 'Our Guys' in A'stan.

Thanks for bringing this to light!!