Arlington: A place to honor and remember - even in snow storms 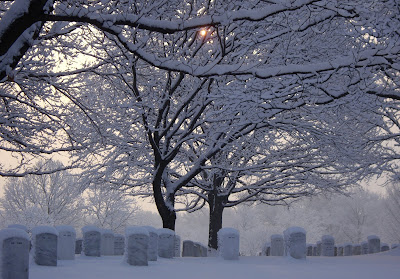 Arlington National Cemetery sits under a blanket of snow after a storm dumped nearly 24 inches of snow on across much of the region. (source) 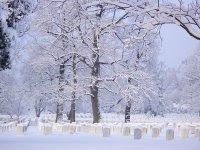 
As most of Washington, DC ground to a halt during the recent snow storms, one very special place in America's history continued honouring our fallen heroes:

Some Funerals at Arlington National Cemetery Postponed Due to Snow

The cemetery — usually open 365 days a year — has been closed to the public all week because of two snow storms that hit the Washington area in the last week, said John C. Metzler, the cemetery's superintendent. Fifteen funerals scheduled for Wednesday and another 15 scheduled for Thursday were rescheduled for later dates. But the choice is up to the families, he said.

The ice has made the cemetery's roads too dangerous for horses and ceremonial marchers, and snow has covered the gravesites. So the funerals this week — 19 Monday, 13 Tuesday, three Wednesday and eight Thursday — were moved indoors.... (reads more here)

Arlington may well have been closed to the public, but as Bob Lonsberry reminds us, the guards there still perform their sacred duty:

LAST NIGHT IN THE STORM IN WASHINGTON

When I see the buildings and monuments, and reflect on what they mean and who they represent, it touches my heart.

It is an inspiring, wonderful place.

I feel the spirit of America there.

Every American should go to the nation's capital at least once. Every American should walk up the steps of the Lincoln Memorial, and stare upward at the Washington Monument, pose in front of the Capitol and the Supreme Court, and peer through the wrought-iron fence at the White House.

If you can ignore the politicians, Washington is a sacred place to Americans.

But the best part of Washington actually isn't in Washington.

It's across the big river, in Arlington. On Robert E. Lee's old farm. What was originally a grandson's loving tribute to George Washington was siezed by the Union Army in the Civil War and became our nation's most revered burying ground.

That's what I've thought about as the blizzard has blown across the TV screen. As this second big storm buries the nation's capital in unaccustomed snow, and the evening news has shown us questionable city officials and stalwart city residents, as I have seen people shoveling snow and unburying cars, I have wondered about Arlington[...]

And the marble temple of gratitude in front of the Tomb of the Unknowns.

That's what I've thought about as they've reported on this blizzard.

As the snow fell an inch an hour, as the government shut down and the offices closed, as this great city was brought to its knees, I've thought about that cemetery and that tomb.

Because, though still, it is not unguarded.[...]

And so it is that in the greatest metaphorical statement our nation makes about its defenders, a member of the Old Guard, an enlisted soldier, stands silent watch day and night, every day of the year, no matter what.

And to be sure, I called my congressman's office. He checked and, yes, in the height of this storm, while everything else shut down, the guard was on duty. When the planes couldn't fly and the Congress couldn't meet. When the bureaucrats stayed home and the government offices were dark. While all the region was holed up and warm, a lone soldier with a rifle on his shoulder marched back and forth in front of the Tomb. ...

Lonsberry has written a beautiful column, which is a lyrical tribute to those who guard our cherished heroes. As you look out into your neighbourhoods knee (or more) deep in that white stuff, give thanks for those who - as Lonsberry puts it - 'march for us all."

Email ThisBlogThis!Share to TwitterShare to FacebookShare to Pinterest
Labels: Arlington Cemetery in the snow, Lonsberry