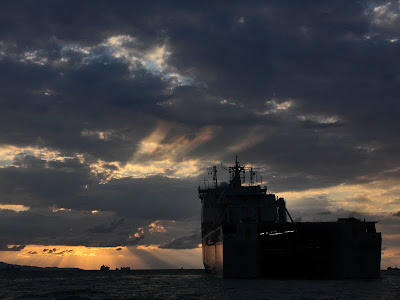 Having arrived off Haiti on Thursday, the crew from RFA Largs Bay has been busy unloading the large aid shipment it brought from the UK to help with the relief effort following the recent earthquake on the island.

A cargo of humanitarian aid, including a fleet of Land Rover four-wheel-drive vehicles, is unloaded from RFA Largs Bay at Port-au-Prince under the watchful eyes of the Royal Logistic Corps' 17 Port and Maritime Regiment
[Picture: Leading Airman (Photographer) Pete Smith, Crown Copyright/MOD 2010]

The relief package provided by the Department for International Development and British and international NGOs (non-governmental organisations) includes goods purchased with donations from the British public in response to the Disasters Emergency Committee appeal.

Her Majesty's Ambassador to the Dominican Republic, Steven Fisher, was at Port-au-Prince in Haiti on Friday to see the cargo arrive on shore:

"One month on there are still very, very important humanitarian needs in this city, particularly the need for shelter and sanitation," he said. "But I am pleased to say that the aid is getting through, and British aid, which you can see behind me, is actually helping to meet those needs."...