From Michael Yon a "Whisper" heard around the world 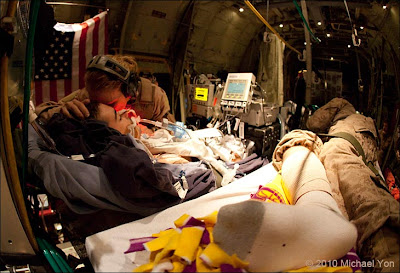 
Michael Yon has been in the sandbox with our guys for 6 years now. He lives with our troops and his reporting has continued to put the msm to shame. Where the mainstream goes with the tired old 'if it bleeds, it leads,' Yon shares every day stories that cannot be found anywhere else. Our troops trust Yon as they do no other reporter, and the picture above is one of the reasons why.

It is often said that 'one picture says a thousand words,' and so it is with 'The Whisper' above. Originally part of a Valentines Day column, this one frame tells so much of the current Global War on Terror, I believe it will become iconic:

From Canada: A Thank You to U.S. Service Members

Today we were sent your story of February 14, 2010. The “unknown” Canadian is our son Danny. He is a 23-year-old solider from Vancouver, Canada.

Your photographs were extraordinary and have impacted so many people here in Canada. There has been an outpouring of affection for the Americans who helped Danny in his moment of need. For that, we thank you for recording these acts of kindness into history.

Danny's injuries were the result of an explosion on February 12, 2010. Four Canadian soldiers were injured and tragically one Canadian solider was killed. Within 20 minutes of the explosion, Danny was airlifted by helicopter to Kandahar. Upon arrival he received emergency surgery that saved his life and prepared him for the flight to Bagram that you were on. After landing in Bagram, Danny was again airlifted by a US transport aircraft to the US Army run Landstuhl Regional Medical Center in Germany. There he underwent additional surgery that closed up his wounds. Once stabilized, the Canadian government dispatched a Challenger jet to bring him home....

You really MUST read the rest of this here. The Valentines Day story that Yon wrote, and first showed this picture? Find that here.

Michael Yon has no corporate funding behind him. He relies solely on donations from grateful readers. Readers who recognise that this war is not just America's war. Anyone who wants the real story of what our guys are doing, makes Yon a daily read. Yon has written extensively about the American soldiers, the British and yes, the Canadian, as well as other coalition troops.

Years from now, when future generations are being taught the history that is happening today, Michael Yon's contributions should be front and centre. As Danny's mother says above, Michael Yon IS recording history.

Please make Michael Yon part of your daily dose of truth and, if you can, contribute financially to his work. In these days when the msm continues to lazily spoonfeed gullible citizens the tired old rhetoric, Yon delivers the goods. Go here, read through his archives; bookmark his site, and then donate what you can.

Email ThisBlogThis!Share to TwitterShare to FacebookShare to Pinterest
Labels: Afghanistan, From Canada a thank you to US, Whisper by Michael Yon