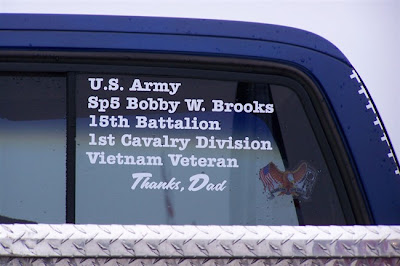 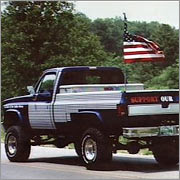 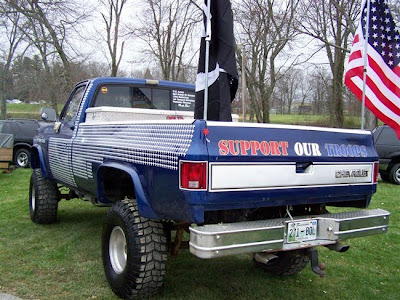 "It is a rolling monument to our veterans, past, present and future.
That's just not something you can replace," A. J. Brooks said.

This truck has been stolen. It is not just an ordinary truck, and the call has gone out to help find this very special tribute to our fallen heroes:

CROSSVILLE (WATE) -- Crooks stole a truck used as a tribute to local soldiers who lost their lives in the war in Iraq.

The truck started out as a project by A.J. Brooks to honor his father, a Vietnam veteran.

The 1987 Chevy has often been the lead truck in the Patriot Guard Riders escort, taking fallen soldiers to their final resting places.

It's bright blue with flags flying and has appeared in several Crossville parades. Thousands of crosses are also on the truck, one for every soldier who died in Iraq.

Someone stole the truck Saturday night.

"I gathered there and placed a cross on the truck to remind them their son will never be forgotten," Brooks said.

He told many stories of how the truck helped grieving families.

"That did put smiles on peoples' faces, put a tear in their eye, but for a good reason, and now it is gone," Brooks said.

Brooks says he was shocked to find the truck was stolen. He says he parked it in a local parking lot on Saturday night.

Sunday morning, it was missing. There was no broken glass or signs of a break-in.

"Whoever took it knew how to get in and start it without any keys whatsoever," Brooks said.

He says it's not just his ride the thieves have taken. It's a local way to honor so many lives lost for the country.

"It is a rolling monument to our veterans, past, present and future. That's just not something you can replace," Brooks said.

Via a Soldiers' Angel, who is also a PGR, comes this from Linda Brooks, another PGR and AJ's mum:

My name is Linda Brooks and I am a Middle Tennessee [PGR] Ride Captain.
I am asking your assistance in helping us to find my son's pick up truck that was stolen in Crossivlle, Tennessee in the very early hours of Valentine's Day (Sunday).
This was not an ordinary truck and I am giving you the link to the story WATE TV in Knoxville aired last night. This news story tells what happened better than I can.
Due to the nature of the truck it could be anywhere in the country. Its highly visible and the only one of its kind.

[Linda did include her email addy, so if you have any questions, contact me.]

If you or someone you know lost a loved one in Iraq or Afghanistan then part of this truck belongs to you. Your loved one is represented by one of the thousands of small white crosses that cover the truck in their honor.

Somebody has to know where this truck is. Please pass this on, and let's get this truck - this tribute to our fallen - back where it belongs. Thank you.