Michelle Obama: Can America afford her? 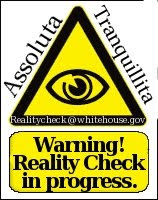 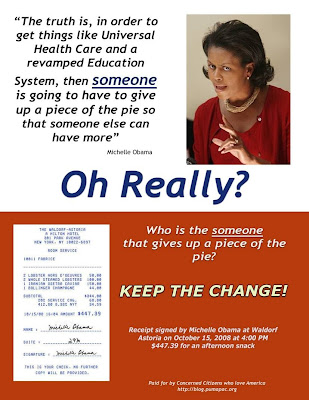 The saying 'there's no such thing as a free lunch' only applies to ordinary Americans. For Michelle Obama there most certainly are free lunches, and so much more that she never has to open her wallet for. The receipt above surfaced during the election campaign - the beginning of the never ending, ongoing campaign.

Across America, the economy continues to bleed jobs:

Americans are struggling. Children are going to bed hungry across the land, but Michelle Obama is feeling no pain. As veterans struggle to make ends meet, and Michelle Obama mouths platitudes of how she cares about them, the social staff in the White House earn the big bucks to ensure Michelle Obama's busy schedule is kept on track.

According to stats from the National Center for Children in Poverty:

Research suggests that, on average, families need an income of about twice the federal poverty level to meet their most basic needs. Children living in families with incomes below this level—$44,100 for a family of four in 2009—are referred to as low income. The United States measures poverty by an outdated standard developed in the 1960s.

Children in Washington, by Income Level, 2008

But don't tell Michelle Obama that.

Let me be clear...(!) I do not begrudge the Obama children the best education in a private school that the taxpayers' dollars can buy. EVERY child deserves access to education. (The UN says so.) Every American child, and their family, should never have to go to bed hungry.

No, my beef is with Michelle Obama. The Obama family campaign beat home the point that Obama and his wife felt the pain of 'ordinary' families right across the '57 states.' In one gushing, nauseatingly sycophantic video during the campaign, much was made of Mrs Obama wearing a $30 dress; you know, like us common folk. And a majority (slim?) of the American people bought into the myth, and now Mrs Obama is finally proud of America as she sits in the lap of luxury in the White House. We won't even get into her $500 shoes that she famously wore to feed the homeless.

As homeless veterans have NO idea where they will sleep on any given night, Mrs Obama's highly paid staff work tirelessly to massage her public image. Mrs Obama's staff make sure she is seen, and heard - at least once, anyway - telling military families that she cares about them. Meanwhile veterans are fighting for every ounce of post deployment rights they have earned. As Obama spouts on about "Jobs" being his administration's number one priority, Mrs Obama's staff enjoy a job status that many Americans can only dream of:

The original of that was posted in Canada Free Press, but that link apparently no longer works. I DID find it at Examiner.com. At a time when BHO is trying to ram a flawed, and deeply unpopular health 'reform' bill (or whatever it is being called today,) down the throats of average' Americans, it is safe to say that all of Mrs Obama's staff have access to the gold plated health services that are paid for by the taxpayer.

Take a look at some of those job titles. Even with my limited experience in the business/corporate world, and just on a cursory reading of the above, I have to ask: WTH are they doing? Rhetorical question of course, since just those bare figures show that the American public is being fleeced - royally?! - in an unprecedented way. History shows that NO other first lady has needed that many staff.

In the interest of balance, I did research that last claim of previous first ladies' staff, and came across this:

The museum page said that former first lady Hillary Clinton had a staff of twenty in addition to fifteen interns and volunteers. The museum also said that Eleanor Roosevelt had two staff members, Malvina Thompson and social secretary Edith Helm.

No, I did not check out that last link, since at about midnight of election day, BHO minions revamped the official White House site to rewrite history. Yes, I checked. And no, we won't talk about the interns in the Clinton administration, who worked for the perks, rather than bloated salaries.

Whatever the truth of previous administrations, in today's economy, it is more than insulting that a woman who has NO official, elected role, should enjoy the obscenity of such perks. And of course, it has to be asked: just how many does it take to write a letter, or book her photo ops? Absurd, of course, since obviously those luxury trips on which she accompanies her husband are arranged by her husband's staff.

In this new era of 'transparency' so loudly proclaimed at every opportunity by BHO, seems to me that America needs a bright light shining into the White House, and an explanation of just why Mrs Obama needs all these over-paid (and obviously under-worked) staff at her constant beck and call.

But as one commenter on the Examiner story said:

She doesn't have to justify this, she's an Obama!!!! Special,

They are changing America - remember?

Yep, they sure are changing America, and America is finally waking up, and asking: Can we afford the Obamas? Come the next elections, I expect Americans to 'write a letter' in the ballot box and send a loud answer to that question.

H/T Diane for the original link.
Posted by The Brat at 5:04 AM

You sound bitter. Get a life!!!

So much for freedom of speech since your comments are moderated.

I recently came accross your blog and have been reading along. I thought I would leave my first comment. I don't know what to say except that I have enjoyed reading. Nice blog. I will keep visiting this blog very often.