Canadian families of the fallen in Afghanistan

Today, families of some of Canada's fallen heroes are in Afghanistan. I introduced you to Mishelle Brown, wife of WO Dennis Brown, here: 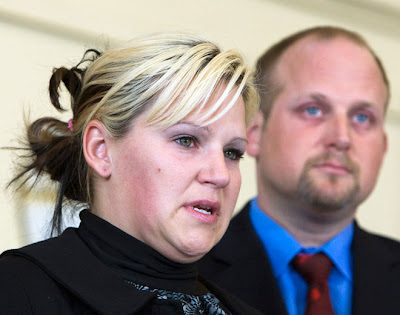 I also included Mrs Brown as one of My Heroes of the Year for 2009. (here)

Today, Mrs Brown and seven other families went to Kandahar, where their loved ones gave all in service to Canada:

'I needed to see it through Dennis's eyes,' wife of a soldier says on three-day visit for final memorial..

Under the rainy skies of southern Afghanistan and thousands of kilometres from her home, Mishelle Brown said her final goodbye.

It has been nearly one year since her husband, Warrant Officer Dennis Brown, was killed in a roadside bomb blast during his first tour in the country. His remains were repatriated to his waiting wife in St. Catharines, but she still sought closure.

“I needed to see it through Dennis's eyes,” she explains. “These guys [other soldiers] come home and they get to tell their wives what it smelled like, what it looked like, and I didn't get that opportunity.”

Ms. Brown was among the relatives of eight fallen Canadian soldiers who were flown to Kandahar Air Field Thursday for a three-day final memorial. Ms. Brown toured the base and stood in a Bison military vehicle, the same type in which her 38-year-old husband died.

“I stood in the sentry hatch where my husband stood in his last moments,” Ms. Brown said. “This is really my final goodbye. I've left him here. This is where he died. This is where I have finally said goodbye.”

Josh Wingrove / The Globe and Mail

Mishelle Brown, whose husband was killed in duty in Afghanistan in 2009, grieves during a memorial at Kandahar Air Field Friday.

The Canadian Forces offer the next of kin of fallen soldiers the opportunity to visit KAF, where Canadian operations are based. Often the ceremonies are low-key or closed to the media. However, Friday's ceremony attracted a crowd of soldiers and onlookers, including top soldier Brigadier General Daniel Menard and the Afghan-Canadian governor of Kandahar province, Tooryalai Wesa.

“In the past months and years, all of you have been hit by what might be described as one of life's biggest storms. Someone you love so much died here in Afghanistan,” Padre Andre Gauthier told the families during the ceremony, which was punctuated by the sound of gunfire and jets flying overhead at the sprawling multinational base.

“This is a unique experience and there can be mystery in the way you are brought closer to your loved one. Here you can touch, see, smell and feel something that your loved one would have when they served in Afghanistan.”

The families left tokens, including photographs, bracelets and small stones, on a memorial that features the names and photos of each of the 139 Canadian soldiers killed since the mission began in 2002. Wreaths were laid for each of the eight soldiers, bearing his name, a purple ribbon and three large poppies....

There is more, including from the other family members, here. From the Montreal Gazette:

KANDAHAR AIRFIELD, Afghanistan — Mishelle Brown realized a dream Friday when she stood in the sentry hatch of a Bison armoured vehicle similar to the one in which her husband, Dennis, "lived his last moment."

The long journey from St. Catharines, Ont., to the exact spot in the kind of vehicle where Warrant Officer Brown often rode represented an act of closure for the widow. It was almost one year ago that her 38-year-old husband and three other Canadian soldiers were killed by an improvised explosive device while they were on patrol in Arghandab District, just northwest of Kandahar City....

It was the eighth time that the Canadian Forces have brought relatives to Afghanistan — a recent tradition that has not been replicated by any of the other nations fighting under the NATO banner here.

Seeing Canadian soldiers in their tan desert camouflage for the first time at the Kandahar Airfield "was really painful," said Brown, who had only ever seen her husband in his green battle fatigues back home.

Such moments were "emotionally draining," she said, especially when they were combined with the "physically draining" trip to Afghanistan. So, she said, she understood why some families chose not to come.

Dennis Brown was 38 and a reservist with one of Canada's most storied units, the Lincoln and Welland Regiment, or the Lincs and Winks, as they have long been known in the military. He is listed as the 112th Canadian soldier to have died in Afghanistan....

The families gathered there Friday under a plastic canopy that shielded them from a steady drizzle to witness a solemn memorial that was attended by Canadian, American, British and Afghan soldiers as well as Kandahar's governor, Tooryalai Wesa.

The governor, a former University of British Columbia professor who has escaped several assassination attempts since returning to the country of his birth, told the visitors, "War is man's great tragedy. But sometimes war, like here in Afghanistan, is necessary."

The governor spoke warmly of the friendship and respect that Afghans, particularly children, had for Canadian soldiers and thanked them and Canada for helping his homeland....

And there is more here.

My heart is with all the families of our fallen, with the greatest respect for their courage and grace.

Email ThisBlogThis!Share to TwitterShare to FacebookShare to Pinterest
Labels: Canadian families of the fallen in Afghanistan, Mishelle Brown, Tooryalai Wesa, WO Dennis Brown