During a postlaunch news conference at NASA's Kennedy Space Center in Florida, the 6:21 a.m. EDT liftoff of space shuttle Discovery was hailed as a great success.

Calling the launch, "a great start to a great mission," Bill Gerstenmaier, associate administrator for Space Operations, said the successful liftoff was a tribute to the team at Kennedy that got the vehicle ready to fly.

Mike Moses, chair of the Mission Management Team, said it was, "a spectacular launch and picture-perfect countdown." He outlined a few minor technical issues that were recorded, but that the spacecraft and crew were ready to start an action-packed mission.

Expressing his happiness that they were able to launch on the first attempt, Pete Nickolenko, STS-131 launch director, said he was proud of the teams that make such a difficult job look so easy.

Also on hand was Japan Aerospace Exploration Agency President Keiji Tachikawa, who noted that this will be the first time two Japanese astronauts will be in space at the same time, as Discovery's Mission Specialist Naoko Yamazaki joins Expedition 23 crew member Soichi Noguchi for the STS-131 mission.

Discovery and crew will spend 13 days in space on their mission to the International Space Station. (here)

"Ah, but a man's reach should exceed his grasp, Or what's a heaven for?" Robert Browning 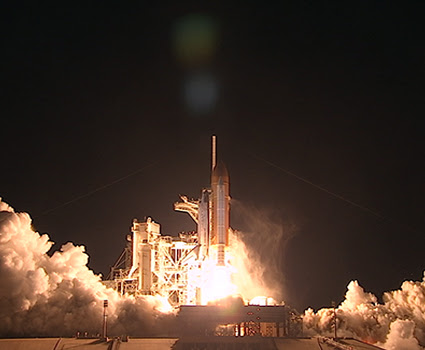 Discovery is carrying a multi-purpose logistics module filled with science racks for the laboratories aboard the station. The mission has three planned spacewalks, with work to include replacing an ammonia tank assembly, retrieving a Japanese experiment from the station’s exterior, and switching out a rate gyro assembly on the S0 segment of the station’s truss structure.