I am sure you all remember Cpl James Arnal, the young Canadian fallen hero from Winnipeg. I wrote about him here: 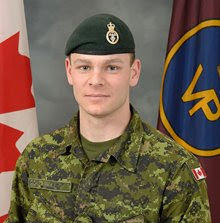 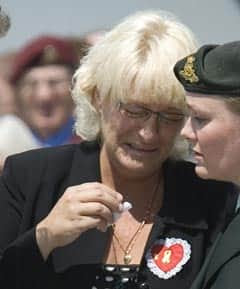 Arnal's mother expressed gratitude to the military, to friends, family and neighbours and even to strangers who have shown their support after her son's death.

"I would like to give our condolences to families and friends of fallen heroes. My heart goes out to you all and it gives me some comfort to know that James is with your heroes," she said.

Then recently, I shared with you all, James' mother Wendy's recounting of her trip to Afghanistan: 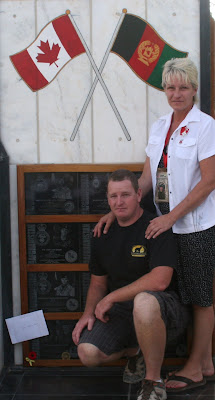 I was taken as far and as close as I could go safely to where my son died....

A few days ago, there was a very special presentation by CarpeDiem88. CarpeDiem88 is the foundation begun by Wendy to honour her son James' memory. Their mission, as stated on their home page:

Everyday, there are thousands of young people across Canada who wish to make a difference in the lives of people in their community, country or other corners of the world. Cpl. James Hayward Arnal was one of those young people. He had witnessed first hand the oppression, fear and lack of freedom the people of Afghanistan endured on a daily basis. James knew he could help these people, and died doing so.

This foundation was created in memory of James, for ordinary people who wish to do extraordinary things. Humanitarian work is needed all over this world and at home, Carpe Diem 88 Inc. is here to provide funding for those ordinary people who want to participate. (Go find out more here)

This week comes this news:

Wendy Hayward holds the war medals of her son, Canadian soldier Cpl. James Arnal, who was killed by a roadside bomb on July 18, 2008 while serving his third tour of duty in Afghanistan. ( JOE BRYKSA / FREE PRESS ARCHIVES)

The charitable foundation established to honour the memory of Cpl. James Hayward Arnal is awarding its inaugural grants this evening to four university students working on humanitarian projects overseas.

The Carpe Diem 88 Inc. Foundation is awarding a total of $8,000 to offset the costs of humanitarian work the young people are undertaking.

"Reading the grant applications was really inspiring ... there are so many young people doing things whether we help them or not. Who knew any of this was going on," Wendy Hayward, Arnal's mother and the founder of the foundation, said.

Arnal was killed July 18, 2008 by a roadside bomb in Afghanistan while serving his third tour of duty with the 2nd Battalion Princess Patricia's Canadian Light Infantry.

Carpe Diem 88 was created by Hayward to carry on her son's humanitarian aspirations. The name of the foundation -- Latin for sieze the day -- was one of Arnal's favourite expressions.

Today would have been Arnal's 27th birthday.

Hayward said she believes Arnal would be pleased with the winners of the first grants, adding it's like they're carrying on her son's work.

"Jim often said that life is about experiences and if you're not having any you're not really living," Hayward said.

"I think Jim would be fully supportive of these young people. It was like Jim was introducing us to all these people."...

And from the CarpeDiem88 FaceBook page, this information on the recipients:

“It is amazing what these young individuals are setting out to accomplish,” said Wendy Hayward, mother of Cpl. Arnal and President of Carpe Diem 88 Inc. “Just as James was an inspiration to so many people, so too will these recipients be an inspiration to other Canadians who wish to help those in need.”

A total of $8,000 is being distributed to the four recipients. The main grant – worth $5,000 – is being awarded to Joshua Schettler. The other three – worth $1,000 each – will be awarded to Katie Muirhead, Emily Vitt and Ashley Van Yperenburg. A committee comprised of Carpe Diem 88 board members selected all four recipients, and were among several applicants that totalled over three-dozen.

Schettler will be returning to Kenya for six months – a country he has previously volunteered in – helping to set up a woman’s clinic that will offer multiple programs related to HIV/AIDS testing, education and outreach.

Muirhead, who has created a Uganda based organization called the Kwagala Foundation, will continue to focus her attention on the facilitation of people-based ideas for sustainable lifestyles. She will be returning to Uganda this summer.

Vitt and Van Yperenburg are both new to volunteering their time to humanitarian efforts abroad. Vitt will be in Costa Rica for 10 weeks teaching English with the organization, Volunteer Abroad. Van Yperenburg will travel to Nairobi, Kenya, where she’ll help run a sports education program with International Volunteer HQ, a New Zealand based NGO.

Thank YOU, Wendy, for continuing James' work of making a difference. Carpe Diem!
Posted by The Brat at 1:11 AM