If you are a regular reader of mine, you will know what high regard I have for our medics. They hold a special place in my heart.

Recently SSG Matthew Kinney was named Flight Medic of the Year at the DUSTOFF Association and AMEC Conference for his actions on Oct. 16, 2008, and for which he was also awarded the Silver Star.

He sent a link to a video of the award ceremony, knowing full well I'd embarrass him by posting it here. Many thanks to Greyhawk for cleaning up the audio so we can better understand Matthew's moving acceptance speech....

And yes, SAG has the video and more on this Every Day Hero here.. 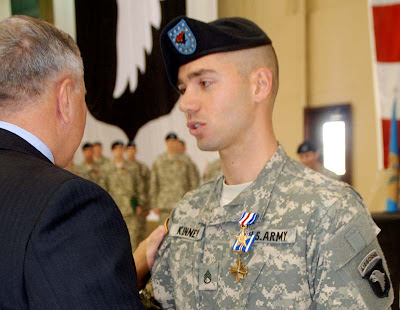 I found this story about SSG Matthew Kinney at Blackfive yesterday. You'll remember Kinney's Dustoff team from the Stars & Stripes article and video I linked to last year.

When Staff Sgt. Matthew S. Kinney’s boots touched the ground in Afghanistan’s rugged Korengal Valley, he knew that six wounded soldiers were waiting for him.

Over the next 45 minutes to an hour, Kinney’s actions under fire to evacuate what eventually became eight wounded men would earn him a Silver Star, the nation’s third highest award for valor.

Kinney, 30, had already served twice in Iraq when he deployed for his first tour in Afghanistan with the 101st Combat Aviation Brigade, of Fort Campbell, Ky.

By the time he came home in January after 12 months in Afghanistan, Kinney had earned a Silver Star, a Distinguished Flying Cross from a separate engagement, and responded to the aftermath of the July 2008 battle in Wanat, Afghanistan, a bloody clash that claimed the lives of nine soldiers from the 173rd Airborne Brigade Combat Team.

“In my mind, I’ve done a lot of stuff throughout my Army career, and I don’t feel like I should be awarded [the Silver Star],” Kinney told Army Times on Feb. 19 after his award ceremony. “It’s like I’m not deserving of the award. I was just doing my job.”... [emphasis mine. How many times have we heard our heroes say that???!]

And yes, there is more about SSG Kinney here at SAG.

Thank you for your service, SSG Kinney.