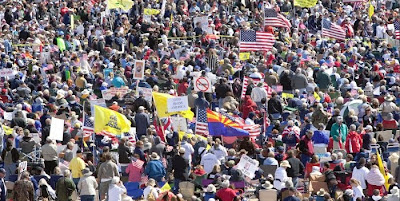 On this day a year ago, about 850 tea party organizers were scrambling to finalize plans for their part in the Historic April 15th, Tax Day Tea Party of 2009.

I remember it well, because I was one of those organizers. I was also fortunate enough to be a “national organizer” (yes, there were national organizers in 2009) and I along with Amy Kremer (Now with the Tea Party Express), Jenny Beth Martin (Now with Tea Party Patriots), Michael Patrick Leahy (Now with National Tea Party Coalition), Stacy Mott & Teri Christoph (Smart Girl Politics), and MANY others were working tirelessly to field media calls, organize volunteers to handle mass amounts of incoming email, and put the finishing touches on a strong network of activists who would work together to get out the message on April 15th.

On April 15th of 2009, the number of concerned Americans to hit the street by far exceeded our expectations. In Chicago, a city that many refused to believe we could get more than 500 people to rally, we had an estimated 5,000 patriots gather in protest.

There were several cities in Texas and other states where an estimated 20,000+ Americans gathered. In total, many experts believe the total nationwide numbers exceeded 900,000 across the country on April 15th last year...(more here)

As that site then says 'much has happened in the last year,' and despite the msm and the politicians' best efforts, the fledgling Tea Party has grown in strength. The msm chose to ignore the huge numbers of Americans who took to the streets to voice their disapproval of the politicians. Many of the Tea Partying Americans had NEVER demonstrated before. Democrats and *certain* politicians and their supporters mocked Americans who spoke up. DHS and other government agencies tried to paint the thousands of Americans exercising their freedom of speech as right wing terrorists, unpatriotic Americans, led by big business, etc etc, at the least. Let's not forget the usual standby label of 'racist,' of any American who dared to take to the streets in rebellion against the 'change' sweeping across America from behind closed doors, and usually under cover of darkness.

Despite these arrogant ignoramuses, Americans would NOT be silenced, and tomorrow is shaping up to be yet another example of the "Will of the People."

Throughout this last year, many observers/writers, PATRIOTS, have been sharing information that the msm wilfully, negligently, chose to ignore. One of the sites I am most familiar with is Wake Up America. Many, many columns have been presented over there. One such recent column:

Twenty-four percent (24%) of U.S. voters now say they consider themselves a part of the Tea Party movement, according to a new Rasmussen Reports national telephone survey. That’s an eight-point increase from 16% a month ago.

Another 10% say they are not a part of the movement but have close friends or family members who are.

Fifty-five percent (55%) of voters say they have no ties to the Tea Party movement. Eleven percent (11%) more are not sure.

The rise in Tea party support is perhaps not surprising at a time when more voters than ever (58%) favor repeal of the national health care plan just passed by Democrats in Congress and signed into law by President Obama...

Then there is this, about a classic and ongoing example of the left's desperate efforts to slur the legitimate goals and voices of the Tea Party Americans:

Bad enough to publicly announce your intentions when those intentions are to trick others into believing you are a Tea Party member spewing hateful racial rhetoric, but to create a website to announce your plans and have it picked up by a large media outlet? Too dumb for words.

Opponents of the fiscally conservative tea party movement say they plan to infiltrate and dismantle the political group by trying to make its members appear to be racist, homophobic and moronic.

Jason Levin, creator of http://www.crashtheteaparty.org, said Monday the group has 65 leaders in major cities across the country who are trying to recruit members to infiltrate tea party events for April 15—tax filing day, when tea party groups across the country are planning to gather and protest high taxes.

The person behind such a brilliant (yes, that is sarcasm) plan is 36-year-old from the Pacific Northwest named Jason Levin. More details on him over at Pajamas Media and Michelle Malkin has some previous examples listed and linked as well...

Yes, there is more about this moron over at WUA here.

In case anybody is deluded into thinking that these crashers, hellbent on 'mischief' tomorrow (oh okay, I am being kind..) are just isolated, independently stupid individuals, acting alone, WUA has this:

The Tea Party, Dissent And Patriotism-The Left Vandalizes, The Right Speaks Up

Over at Memeorandum, I saw a listing of stories, starting with "Source: State Dems scrambling to deploy tea party ‘crashers’," recounting a source who tells them that liberal activists are being sought to "carry signs expressing racist or fringe sentiments", to which media can capture, show publicly and associate with Tea Party protesters.

Reading through the discussions I came across Neptunus Lex and the first paragraph reminded me of all the stories written and ink dedicated to dissent from left during Bush's term.

The Tea Party phenomenon absolutely enrages the left, which had considered dissent as the highest form of patriotism until the other side got a whiff of it....

As the Tea Party grows in name recognition and size of membership, we continue to see more and more liberals angry and determined to sabotage the effort, not with truth, but with fake protesters holding signs and screaming racist remarks in order to have those types of actions associated with the Tea Party.

Yesterday we saw articles written about a man named Levin who publicly says he has people to "infiltrate" the Tea Party movement for no other reason then to make them look bad.

Make them look bad, yet when Bush was President and the left was protesting, no one had to "infiltrate" or fake actions, the left's protesters and their actions were caught on film and reported on and the internet never forgets.

A little trip down memory lane seems to be in order with a few comparisons to Tea Party protests and "others"...(read the rest here)

That post is well worth the read, if only to remember to what depths the Code Pink et al have been willing to sink in their attempts to silence, denegrate, the legitimate voices of Americans upset with the direction American is being ramrodded.

Fact is, every protest thus far by the Tea Party Americans has been orderly (despite being in the hundreds of thousands,) and every gathering of the dimtwits has been a snapshot of the ugly Americans. That IS a fact.

Tomorrow will see another demonstration of orderly, patriotic Americans coast to coast, taking to their streets to raise their voices in support of the US Constitution.

Fact is, the idiots can try and paint these Americans in a bad light; the msm can ignore them, and the politicians (and yes, even BHO with his 'there was a demonstration?') can mock and name call them all.

The Americans I know will not be silenced. Tomorrow, hundreds of thousands of them WILL show their employees (the politicians, in case they forgot) what they think of them, as is their right.

Those politicians, who have jobs - for now - will ignore the "Will of the People" at their peril, because to do so, could find them on the unemployment lines (along with the other 10+% unemployed Americans) come November. And yes, it appears that *some* politicians may finally be hearing the voice of the American people. For an interesting article on that topic, go read: Hoyer admits: Tea Party Spurs Members to consider Retiring here.

And then, go over to Monkey in the Middle here for a helpful idea on your MO for tomorrow's Tea Party.