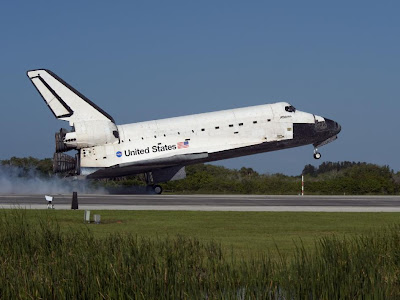 The third of five shuttle missions planned for 2010, this was the last scheduled flight for Atlantis. The mission, designated STS-132, delivered the Russian-built Mini Research Module-1 to the International Space Station. Also known as Rassvet ("dawn" in Russian), the module provides additional storage space and a new docking port for Russian Soyuz and Progress spacecraft.

The mission's three spacewalks focused on replacing and installing components outside the station, including replacing six batteries, installing a communications antenna and adding parts to the Canadian Dextre robotic arm.

A welcome ceremony for the astronauts will be held Thursday, May 27, in Houston. The public is invited to attend the 4 p.m. CDT event at Ellington Field's NASA Hangar 276.

Highlights from the ceremony will be broadcast on NASA Television's Video File. For NASA TV downlink information, schedules and links to streaming video, visit:

STS-132 was the 132nd shuttle flight, the 32nd flight for Atlantis and the 34th shuttle mission dedicated to station assembly and maintenance.

With Atlantis and its crew safely home, the stage is set for the launch of shuttle Discovery on its STS-133 mission, targeted to lift off in September 2010. Discovery's flight will deliver the Leonardo Permanent Multipurpose Module to house experiments. STS-133 also will bring critical spare components and a cargo carrier to the station. Robonaut 2, or R2, will be the first human-like robot in space when it flies on Discovery to become a permanent resident of the station.

For more information about the STS-132 mission and the upcoming STS-133 flight, visit:


For information about the space station, visit:

Email ThisBlogThis!Share to TwitterShare to FacebookShare to Pinterest
Labels: Atlantis is home, NASA