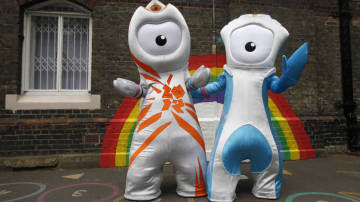 From the Globe and Mail:

One-eyed monsters or twisted aliens from Doctor Who?

The British press may have peppered Canada with criticism over the unfurling of its Vancouver Olympics, but the release of the London 2012 mascots Wednesday has already made the nation the butt of many a joke.

The London Organising Committee of the Olympic Games introduced the world to Wenlock and Paralympics mascot Mandeville, delighting schoolchildren and confusing most others. The metallic creatures are far cries from Vancouver’s cute Quatchi the sasquatch, Miga the sea bear and Sumi the animal spirit, which fit with the aboriginal theme of the Vancouver Games.

However, they too carry cultural significance, British officials said. Mandeville is capped with a yellow London taxi light, and Wenlock sports Olympic rings for bracelets. Wenlock was named after the town of Much Wenlock that inspired Pierre de Coubertin to craft a modern-style Olympics; Stoke Mandeville is the where the Paralympics were founded.

The amoeba-like toys are from a children’s story called Out of a Rainbow by Michael Morpurgo, which tells how they were crafted by a loving grandfather out of bits of steel from the Olympic Stadium that he helped build. Infected by the beams of a rainbow, they came to life and inspired the kiddies.

Of course, the social media world had a field day, mercilessly skewering the mascots designed to rake in millions in Olympic revenue.

Some observers thought they saw characters from The Simpsons in the London 2010 logo which appears on Wenlock’s chest. Others called the mascots frightening and phallic.

Canadian Richard Paterson summed up the Olympic national culture wars on his blog Wednesday night. “Cool the new London Olympic Mascot is a male body part!” he wrote. “Gosh we Canadians are going to have fun with the Brits.”...(Yes, the Globe and Mail has more here.)

Question: WTH were they thinking? Many thought the 2010 Winter Olympics had the weirdest mascots that bore no historical or cultural relevance at all to the venue, no matter the pr spin. I have to say, though, I think London Olympic Organising Committee has outdone even those bizarre creatures. These 'things' represent London? Nevaaaaaah!
Posted by The Brat at 1:43 PM