From The Thunder Run:

The Stokely family sat in a football stadium on a warm Friday night just before Memorial Day 2001 to watch Mike Stokely graduate high school. He already had boot camp / basic training and a year in the National Guard under his belt and would be heading off for Advanced Individual Training at Ft. Gordon in a few weeks. His little sister, Abbey, almost nine, couldn't let go of him, even to have a photo taken with Mike and their brother, Wes. She swung on his arm adoringly - her look of love says it all. 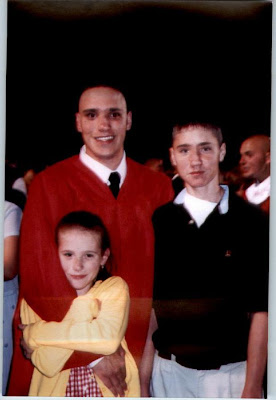 On the morning of August 16, 2005, as my wife Retta and I sat with Wes and Abbey just after breaking the news to them of Mikes death earler that morning, then 13 year old Abbey buried her head into my shoulder, sobbing these words: "he was supposed to chase away my first boyfriend, he was supposed to cheer at my graduation from high school, he was supposed to be an uncle to my children..." These words seared my heart, broken as it was. I shall never forget them. She lost her oldest brother that day, her "Bubs" which she called him short for his nickname, Bubba.

Tonight, May 27, 2010 at the football stadium for Northgate High School in Sharpsburg GA, Abbey Stokely graduated last with her class. She has had a rough five years that started with Mike's death in Iraq. Five months later, she and I were broad sided by a driver who ran a stop sign at 45 plus and rolled and flipped us several times, shearing her right rear passenger door away. She spent 18 months recovering from her serious neck, back, and head injury. Those two events might seem enough to cause a student to graduate last....

The Stokely family has given so much in service to America. As Robert says in his last sentence of this column:

I was reminded again that the highest cost of Freedom is A Lifetime of Love.

If you read nothing else today, or this whole Memorial Day weekend, go read this one here.
Posted by The Brat at 6:01 AM