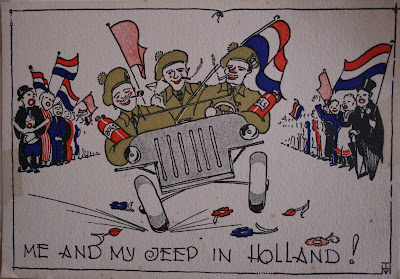 In the Netherlands, Liberation Day (Dutch: Bevrijdingsdag) is celebrated each year on May 5th, to mark the end of the occupation by Nazi Germany during World War II.

The nation was liberated largely by Canadian troops, with the assistance of the British and American Armies (see Operation Market Garden) and French airborne (see Operation Amherst). On the 5th of May 1945, the Canadian General Charles Foulkes and the German Commander-in-Chief Johannes Blaskowitz reached an agreement on the capitulation of German forces in the Netherlands in Hotel de Wereld in Wageningen. One day later, the capitulation document was signed in the auditorium of Wageningen University, located next-door to the hotel.

The people of the Netherlands, together with Canadian veterans and dignitaries, are marking the 65th anniversary of the country's release from Nazi occupation.

May 5 is celebrated as Liberation Day in the Netherlands.

In the city of Wageningen, where Canadian forces accepted the surrender of the Germans in 1945, about 500 veterans marched through the streets or rode in the backs of restored World War II trucks to the applause of spectators.

"The Canadians are once again being honoured as the liberators that they were for this country, and certainly for this village," he said.

About 2,500 Canadian students are in the country for the ceremonies, meeting with veterans and touring cemeteries and former battlefields.

Veterans Affairs Minister Jean-Pierre Blackburn was in attendance and Prime Minister Stephen Harper was to fly to the Netherlands later Wednesday to attend memorial ceremonies. Harper was flying in from Brussels, where he had been meeting with the president of the European Union Commission.

On Tuesday, the Canadians participated in a memorial ceremony at Holten Canadian War Cemetery, the resting place of 1,355 Canadians who died in the latter phases of the war in Europe. (CBC here with some great pictures)

Spade34 If you call we will come to your aid and we would do﻿ it again. I speak for all Canadians .