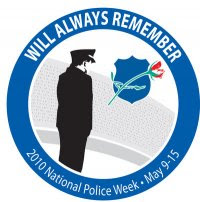 As a Nation, we rely on law enforcement officers to keep our neighborhoods safe, enforce our laws, and respond in times of crisis. These men and women sustain peace and order across America, and we look to them as models of courage and integrity. This week, we honor their extraordinary service and sacrifice, and we remember the fallen heroes whose selfless acts have left behind safer streets and stronger communities.

Every day, peace officers face the threat of violence and danger. They routinely put their lives on the line to defend ours, and the price of that bravery may result in injury, disability, or death. The steadfast dedication of our country's law enforcement officers warrants more than praise. That is why my Administration has provided billions of dollars in grants to support State, local, and tribal law enforcement agencies. These funds are giving peace officers the tools and resources they need to help ensure our safety.

Thanks to law enforcement officers, our Nation is more secure. They work with vigilance and dedication to identify and arrest those who seek to do us harm. They have also been instrumental in foiling many potential attacks, including the recent plot in New York City's Times Square. From combating terror and staking out criminals to patrolling our highways, peace officers with the strong support of their families maintain stability in our communities as we go about our daily lives. This week, we recognize their invaluable contributions to upholding justice, enforcing the rule of law, and protecting the innocent.

NOW, THEREFORE, I, BARACK OBAMA, President of the United States of America, do hereby proclaim May 15, 2010, as Peace Officers Memorial Day and May 9 through May 15, 2010, as Police Week. I call upon all Americans to observe these events with appropriate ceremonies and activities. Let each of us reflect on the ways in which our lives have been touched by the peace officers who stand guard over our neighborhoods. (White House)

The president will speak at the National Peace Officers’ Memorial at the Capitol. It’s a memorial ceremony for families of peace officers who died while on duty last year. (No political statement from me on this one!)

Each May during National Police Week the nation pauses to recognize the service and sacrifice of U.S. law enforcement.

Established in 1962 by President John F. Kennedy and a joint resolution of Congress, National Police Week pays special tribute to those law enforcement officers who have lost their lives in the line of duty for the safety and protection of others. Ceremonies are held in Washington, DC, and in communities across the country.

In the nation’s capital, National Police Week features a number of special events and moving tributes.

Schedule of Events: (Visit: http://www.nleomf.org/assets/pdfs/npw/schedule_npw_2010.pdf to download a schedule.)...

It is also RCMP Police Week (Canada) and you can find more on them here.

ommunities across North America have built memorials to honor peace officers who have died or become disabled in the line of duty. Each year during Police Week, departments hold open houses, conduct tours of their facilities, and hold community activities to celebrate police officers and their duties. May 15 has been designated National Peace Officers Memorial Day, and most local communities hold a memorial service in remembrance of police officers who have made the supreme sacrifice for their communities.

Public Law 87-726: On October 1, 1962, U.S. president John F. Kennedy signed into public law a joint resolution of the 87th Congress designating May 15 as Peace Officers Memorial Day in honor of federal, state, and municipal peace officers who have been killed or disabled in the line of duty. Each year, the calendar week in which May 15 falls is called Police Week.

Public Law 103-322: In 1994, U.S. president William J. Clinton signed into public law a joint resolution of the 103rd Congress directing that the flag of the United States be flown at half-mast on all government buildings on May 15.

Flying the national colors at half-mast on National Peace Officers Memorial Day honors police officers who died in service to the community and the country. Unfortunately, observations suggest that many local governments and business communities are unaware of the authorization to lower the national flag to half-mast on May 15 of each year; local police executives can overcome this lack of awareness with an educational effort.

Most local communities incorporate a resolution into their municipal code designating days that flags will be flown at half-mast. Once local governments have identified the appropriate days, businesses and others tend to follow suit. Police executives are encouraged to ensure that May 15 is observed in the local jurisdiction’s ordinances and to conduct a local campaign to inform local businesses of this observance. (source: Police Chief Magazine)

Our police officers serve every single day, with very little fanfare. They all lay their lives on the line every time they go to work, and some pay the ultimate sacrifice as they protect us. Go here to Officer Down Memorial Page, Inc - read the names of some who have died in the line of duty.

Be sure to take a minute and THANK a police officer (and their families) today and every day.

My family thanks all those who protect and serve.

As the daughter, sister, niece and aunt to six WV State Police troopers,(plus cousin to a few), I would like to sincerely to thank all the police who serve so selflessly. Stay safe!!!
CJBSRN