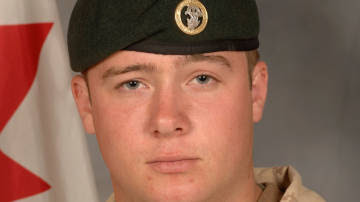 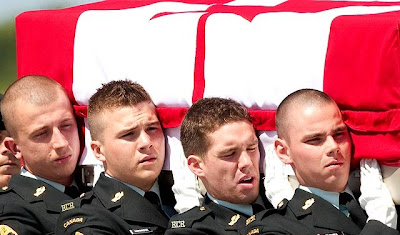 The casket carrying the remains of Pte. Kevin McKay is brought from the aircraft to a waiting hearse past a group of his comrades who returned with his remains to Canada following their tour of duty at CFB Trenton Sunday May 16, 2010, during a repatriation ceremony on the tarmac at the military base. Pte. McKay is the 144th Canadian soldier to die in conflict since 2002. He was killed May 13th by an improvised explosive device near Kandahar, Afghanistan. (THE CANADIAN PRESS. Story here)

Pte Kevin McKay came home to Canada on Saturday via the Highway of Heroes.

"...It's our turn to stand on guard for thee...because you keep our true north strong and free... You are all our daughters and our sons..."